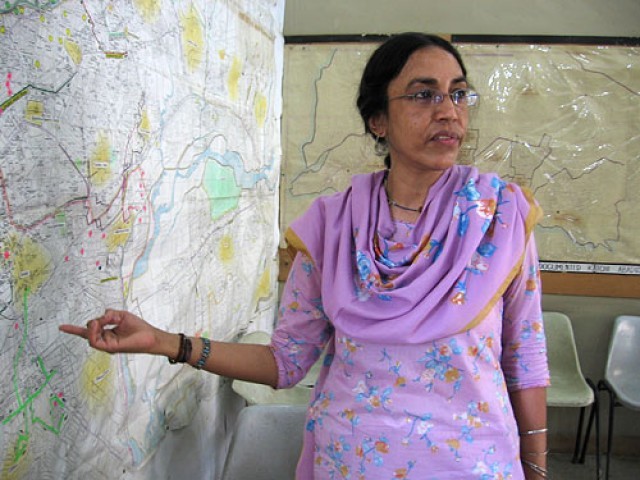 The Supreme Court of Pakistan has summoned Khawaja to appear before the bench along with a comprehensive investigation report into Rahman’s murder on March 13, 2013.

Dressed in casual shalwar kameez, Khawaja met the present OPP director Anwer Rashid and the chairperson, Tasneem Ahmed Siddiqui. “What was your first concern about the investigations into this case?” Khawaja asked Rashid. “I don’t think any investigation has been carried out,” Rashid replied in a low voice. “When we were returning from her [Rahman’s] funeral, the police claimed they killed her murderer.”

Special Investigation Unit chief SP Farooq Awan, Investigations SP Malik Ahsan, Anti-Car-Lifting Cell SP Nouman Siddiqui and two DSPs had accompanied Khawaja to the meeting. Rashid briefed the police team about the projects the OPP is carrying out in the country and the ones in Karachi.

Rashid informed the team about the ‘urban goths’ (villages) survey and another survey on water supply from the illegal hydrants, which Rahman and her team conducted. Both the surveys affected the interests of those people who are the beneficiaries of these hydrants, he added.

In the first survey, 2,057 urban goths were identified, mapped and documented. The Sindh government regularised 1,063 of them from time to time, which meant that the land grabbers were unable to claim them, Rashid explained. Khawaja asked them who assigned the goths survey project to OPP to which Rashid and Siddiqui replied that they chose it on their own.

The police were informed how the OPP works in the field and about its permanent staff, who work from the office in Qasba Colony. SP Awan wanted to know why the OPP representatives were attacked in Pirabad and not other areas of the city. “Because we sit here,” Rashid replied.

According to Rashid, the OPP teams have suspended their field activities in Karachi and shifted some of their workers to other parts of the city. The OPP Research and Training Institute’s joint-director, Salim Alimuddin, has stopped coming to this office after he was attacked in the same vicinity and in the same car in which Rahman was killed.

Khawaja was also given a briefing on the OPP’s loan system and its outstanding loans towards the people in rural areas. SP Awan asked if they’ve received any threats in the past and how much private security they keep. Rashid said they never received any threats and they have a few watchmen for security at night.

“Shahid Hayat [the former city police chief] deployed a police van to visit the office in the morning and evening when our workers move from the building,” Rashid said.

Night of the attack

Rashid also described the evening when Rahman was murdered. The two of them left the office at the same time but Rahman’s car had to slow down for a vehicle to pass. The incident took place immediately and her driver frantically drove the car all the way to Abdullah College. From there, she was taken to Abbasi Shaheed Hospital, he added.

“The technical analysis in a case is very important and we will get some of the technical details from the investigation officer,” said Khawaja at the end of the meeting. “We will try to get more data from related departments for geo-fencing.” He also advised Rashid to keep security at the office and offered to help them get more police escorts. “We must know the motive and reason behind Rahman’s murder and the attack on Alimuddin so we can be careful. Right now, it is a blind case.”