Transl­ation of both poems was launch­ed in London on Monday. The poetic rhythm and nuance­s of Urdu have been retain­ed .
By Saleha Riaz
Published: May 29, 2014
Tweet Email 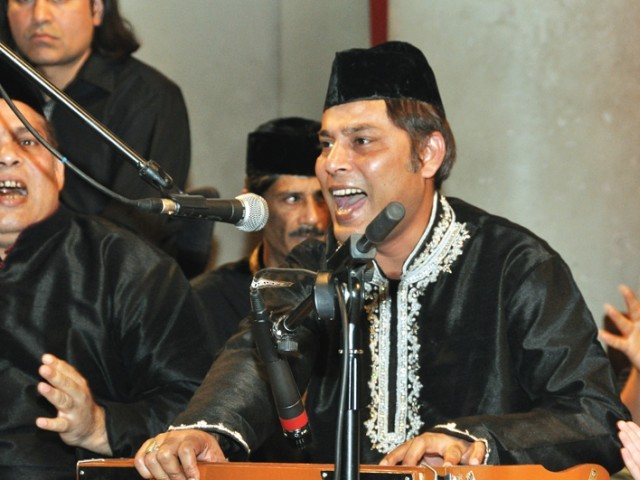 The translation was launched Monday evening, with a symposium chaired by journalist Syed Talat Hussain and a qawwali performance by the Hussain brothers. PHOTOS: PUBLICITY

Fans of the great poet Allama Iqbal in London were in store for a rare treat when Shikwa and Jawaab-e-Shikwa – a contemporary translation’ by Professor Muhammad Sharif Baqa was launched on Monday evening. With a symposium chaired by journalist Syed Talat Hussain and a qawwali performance by the Hussain brothers.

The two poems were written in 1909 and 1913 respectively. Shikwa, consisting of 31 stanzas, was presented by Iqbal in April 1911 to the annual session of Anjuman Himayat-i Islam held at Islamia College, Lahore. Jawab-e-Shikwa consists of 36 stanzas which Iqbal recited at a public gathering in 1913 outside Mochi Gate, Lahore. The translation of both poems took over a year to complete and effort was put into retaining the poetic rhythm and nuances of the Urdu language.

The event was organised by Lafz Media and the Canadian-based International Iqbal society. The CEO of Lafzz Ahmad Nawaz said Iqbal has always been an inspiration; his ideals, if followed, can lead to a just and moral society, something those who envisaged Pakistan wanted.

He said he found the negative portrayal of Pakistan becoming intolerable and wanted to highlight the country’s contributions, reflect on its shortcomings and celebrate and share its rich culture, which is how Lafz came to be. He said Lafz believes education is the only sustainable foundation for the betterment of the country and has set up a school in Chakwal, serving nine villages and 400 students in hopes of churning out “future Iqbals”. The organisation is currently collecting funds to open an Iqbal wing.

Imran Mirza, the acting high commissioner to the UK and the chief guest of the event said: “Today, Pakistan is faced with multifaceted challenges. The spirit of Islam and its message have been distorted by the religious extremists. There is an urgent need for reverting to Iqbal’s teachings and philosophy more than ever before.”

He said Iqbal united the Muslims of India at a time when they had lost their identity; they were divided and dejected. His poetry awoke them from their slumber and gave them a common vision to work towards.

“He was the philosopher of the East who learnt from his experiences in the West and shaped his ideas,” concluded Mirza.

The preface to the book has been written by Professor Katherine Schimmel of Harvard University. The foreword is written by former cricketer turned politician Imran Khan and the introduction is by anthropologist Professor Akbar S Ahmed.

Schimmel was part of the symposium that discussed the great poet, along with Dr. Kamran Tahir, Iqbal’s fellow at Cambridge, Dr. Halima Krausen from Hamburg and Professor Baqa, the translator.

Journalist, Syed Talat Hussain flew from Pakistan just to hold a 20-minute-long symposium, something he said he would do “only for Iqbal”.

Hussain said he equated Iqbal’s poetry with the country’s national anthem – something its citizens recite often but don’t really understand.

“We must understand the evolution of his thought,” said Hussain. “He was a man of great dynamism. He didn’t believe in religion that did not empower.”

His thoughts were “deliciously contradictory”, he said. He wanted to build a house in Europe, yet he did not like the way the West conducted itself. He loved Sufism, yet he spoke of the importance of oneself – something Sufism seeks to negate, explained the journalist

Professor Katherine Schimmel, who considers herself an avid student of the poet, said: “Iqbal is about self-awareness, growing, becoming more illuminated – peeling back layers to get to the essence – the one true reality which is an endless struggle, and an awakening of the spirit.”

“It took me a long time to understand him. When I heard him for the first time, his verses were so profound and beautiful – I nearly fell backwards.”

According to Professor Baqa, “when Iqbal saw the achievements in the West he had the burning desire to revolutionise the lives of his own countrymen.” When he emphasised knowing the ‘self’, he did not want us to glorify the self, nor kill it, said the professor. Rather, he wanted us to be self-aware so that we can perfect our own personalities and benefit society as a whole. “He wanted to create unique human beings”.

Hussain ended the symposium by saying that we have much to learn from Iqbal. “You can’t change the nation by merely tweeting, there is a world out there that beckons you,” concluded Hussain.

This is evident in Shikwa

Why should I waste my poetic talent,

In lamenting my glorious past, yet ignoring my bright future?

How can I be indifferent to the doleful cries of my nation?

O my dear friend, I cannot be tongue-tied like a flower.

It is truly my poetic ability that gives me the courage to express my feelings,

May I be cursed should I ever complain to God!