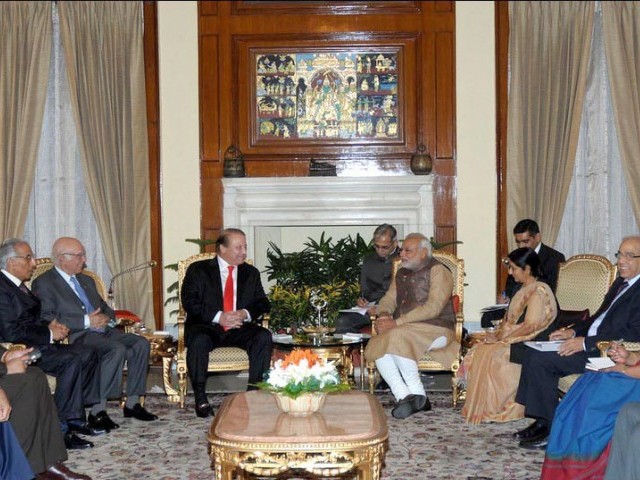 The two leaders shared a 26-second handshake and held a 30-minute meeting that spilled over 50 minutes. Officials said the chemistry between the two prime ministers was good. PHOTO: INP

On his first day in the job, India’s Prime Minister Narendra Modi pressed his Pakistani counterpart Nawaz Sharif for action against “terrorist groups” across the border, underlining sharp differences in both the style and approach of the leaders of Pakistan and India.

While Modi’s blunt warning to Islamabad amply showed that New Delhi wasn’t prepared to forget the past, Prime Minister Nawaz Sharif was looking at the future and appeared unwilling to drag old skeletons from the political cupboard, glossing over the irritants that have kept alive the tensions between the two neighbouring states.

In stark contrast to Modi, PM Nawaz Sharif spoke of burying the past and turning a new page during Tuesday’s historic meeting between the two leaders in New Delhi. His Delhi jaunt, in fact, was all about felicitating the new leader of India. There was no mention of the central issue of Kashmir, Siachen Glacier, Sir Creek, Wullar Barrage or even the water disputes involving the two neighbours. When PM Nawaz was preparing to fly out of the country, Indian officials did not accord him the same protocol that he had received upon his arrival, diplomats observed.

Even though PM Nawaz did not meet with representatives of the All Parties Hurriyat Conference nor discussed Kashmir and instead focused on trade, his Indian counterpart insisted on talking about security.

PM Nawaz took no questions after the meeting and reading from a prepared text, he told the press, “I recalled to Prime Minister Modi my invitation to former prime minister Vajpayee. I intend to pick up the threads from the Lahore declaration […] PM Modi warmly reciprocated my sentiments and remarked that my visit to New Delhi was seen as a special gesture by the people of India.”

“It was conveyed that Pakistan must abide by its commitment to prevent its territory and territory under its control from being used for terrorism against India,” she said. Pakistan was told that it needs to take effective measures to control terror, she maintained.

According to Singh, Modi flagged the point that the probe into the 26/11 Mumbai attacks needed to be expedited. The pace of investigations was too slow, the Indian premier pointed out.

However, India did not clarify whether the issue of extradition of Dawood Ibrahim was raised or not. “We choose not to discuss it (with the media). These were confidential meetings,” the Indian foreign secretary said.

According to officials, the attack on the Indian Consulate in Herat was not discussed.

On a more positive note, the talks also covered the need to improve trade between nations and expanding trade on the Wagah and Attari borders.

During his short and scripted address to the media, PM Nawaz, too, said, “Our common agenda is not possible without peace and security. Consequently, it is important for us to work together. Let us change confrontation into cooperation.”

He added, “I pointed out that we were at the beginning of our respective tenures with a clear mandate. This provides us the opportunity of meeting the hopes and aspirations of our people that we will succeed in turning a new page in our relations. The one-and-a-half billion people of the two countries want us to focus on their well-being and welfare.”

The two leaders shared a 26-second handshake and held a 30-minute meeting that spilled over 50 minutes. Officials said the chemistry between the two prime ministers was good.

In the past, Modi had made much of Nawaz Sharif’s ‘dehati aurat’ remark about former Indian prime minister Manmohan Singh and had attacked Pakistan for being disrespectful. However, there was not even a hint of anything intemperate during the talks. Modi also accepted PM Nawaz’s invitation to come to Pakistan.

Earlier in the day, the prime minister visited the historic Red Fort and called on the Imam of Delhi’s Jama Masjid, Abdullah Bukhari. “He wants that relations between the two countries should improve and the bitterness and differences are reduced. He said both India and Pakistan should move toward peace and happiness,” Syed Ahmed Bukhari, the Shahi Imam of Jama Masjid, told reporters after the premier’s visit to the mosque.