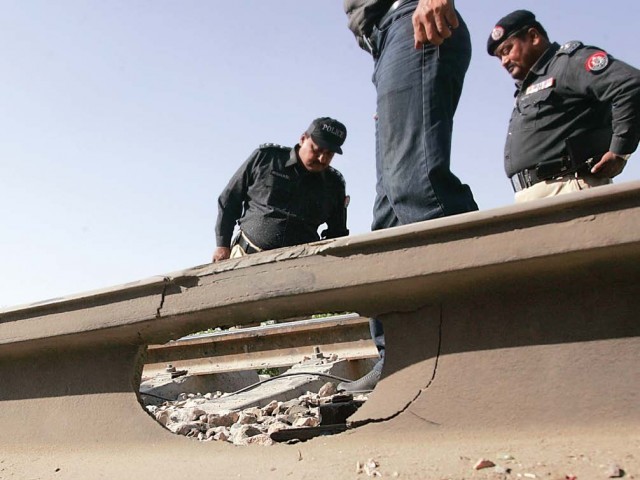 Police stand near a railway track, which was damaged by bomb blasts in Hyderabad on Monday. photo: REUTERS

HYDERABAD: Four bombs planted at the Guddu railway tracks passing through Sehrish Nagar went off on Monday afternoon, damaging the up and down tracks. Nearby residents heard two explosions at around 1:20 pm, before the arrival of any train, after which the police and the Bomb Disposal Squad cordoned off the area.

The police found a pamphlet at the scene, bearing a message from the Sindhu Desh Liberation Army (SDLA), in which its chief commander Darya Khan claimed responsibility.

Meanwhile, all railway traffic along the up and down tracks at the Hyderabad and Kotri railway stations was suspended as the Pakistan Railways engineering wing started repairing the damaged tracks. According to the railway administration, the blasts damaged a four-and-a-half-foot portion of the down track 14 kilometres away and a four-foot eight-inch portion of the up track 15 kilometres away from the Guddu railway track No 176. No trains were damaged. The Pakistan Railways engineers took two hours to repair the tracks, after which they were opened for traffic.

The police had been receiving warnings of explosions for the past one year, said DPO Hyderabad Muneer Ahmed Shaikh, who constituted an inquiry team – comprising SP City Sahibzada Bilal Umer and SP Investigations (Hyderabad) Ghulam Nabi Keerio – to probe the matter and submit a report at the earliest.

Sindh Home Minister Zulfiqar Mirza also demanded a report from the RPO Hyderabad and gave orders for the arrests. Security must be provided to witnesses, said Mirza, who also ordered sketches to be made.

The case must be investigated and — based on “strong evidence” — the culprits can be punished, said Mirza.

The home minister asked the police to improve their security system and ensure an exchange of intelligence reports so that action could be taken.

Rail tracks attacked in the past

Incidents of bombs being planted at railway tracks were reported across the province earlier in the year, the most recent on July 13, when the BDS had found and defused four bombs — each packed with two kilogrammes worth explosives — planted on the up and down railway tracks one kilometre away from the Derolal station near the Bahadur Khoso area in Matiari.

In all these incidents, the SDLA had left pamphlets on the scene, mentioning the “atrocities” being carried out against Sindh and promising to continue their “struggle” till Sindh was granted “freedom”.

With additional input from APP/PPI

Forced to bring her rapist’s child into this world