PCB chairp­erson adds that these forces are behind Imran Khan and have asked him to stand his ground.
By News Desk
Published: May 13, 2014
Tweet Email 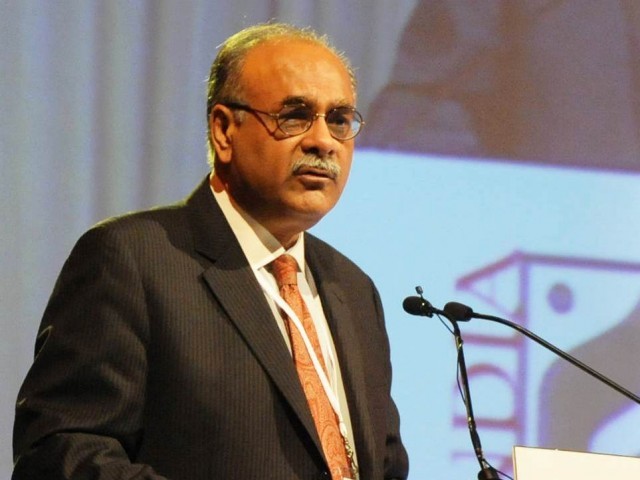 Pakistan Cricket Board (PCB) chairman Najam Sethi on Monday said there were “institutions” or “third forces” which were uncomfortable with Geo TV, PM Nawaz Sharif and “independent anchorpersons” like him, adding that these forces were behind Imran Khan and had asked him to stand his ground.

Sethi was speaking in a television show. When the anchor asked him what was his perception as an ‘insider, what did he think was ‘their motive’ and why ‘they’ had become enemies of those, they used to sing praises of – Sethi replied, “Both of us know why”.

He said he had openly said it in his show. “Other people have also hinted at it. I don’t believe in hiding things,” he claimed.

“The thing is that there are institutions in this country –third forces – which are offended by Geo and [Prime Minister] Nawaz Sharif. These institutions are being criticised by independent anchors like us. They have put Imran Khan on the front stage, have given him a green signal and asked him to stand his ground.”

He said today a new force [Tehreek-e-Insaf] was emerging and it was also playing in their hands.

“It will harm the country and further damage it. They should not do this. They should join forces with people, media and independent judiciary and do good politics. They should not join hands with those secret institutions and engage in dirty politics,” he said.

Intra-court reference: Geo only accepts decisions given in its favour, claims Justice Siddiqui