Imran Khan and his party want to demoli­sh the credib­ility of the whole electi­on proces­s of May 11, 2013.
By Nusrat Javeed
Published: May 10, 2014
Tweet Email 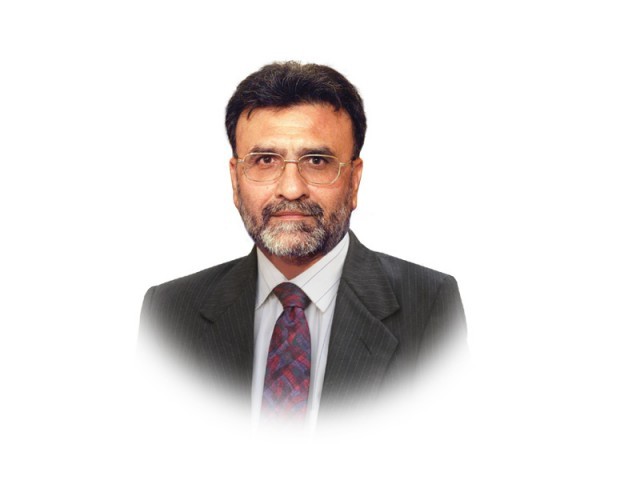 ISLAMABAD: For some unfathomable reason, “our representatives” were shy to discuss the April 19 attack on a famed TV anchorperson and the explosive divisions it had triggered in our state and society through an appropriate adjournment motion. Under the generic head of “discussion on law and order,” they rather preferred delivering neither here nor there kind of speeches during the first two sittings of the ongoing session.

Things, however, drifted towards a different direction on Wednesday, when Javed Hashmi made a long speech to explain and justify the rally that the PTI had planned for May 11 in Islamabad. Imran Khan came to the house the day after to reaffirm what Hashmi had stated. And the story should have ended there.

From hearts of their hearts, however, most PML-N legislators continue to suspect that the PTI’s rally of May 11 has been ‘winked’ by quarters known for making and breaking governments in this country. Under the garb of a politically correct sounding demand of forensic analysis of polls held in four specific constituencies of the national assembly, they believe, Imran Khan and his party want to demolish the credibility of the whole election process of May 11, 2013. Pretty anxious and desperate they sound to refute this PTI promoted narrative.

Khawaja Saad Rafique took the lead in this context the other day and did appear doing the needful by making a forceful speech. The PTI wanted to counter him then and there, but the speaker adjourned the house immediately after Saad’s speech.

Most journalists and fair-minded legislators strongly believe that Sardar Ayaz Sadiq should not have adjourned the house in such haste. After all, he also had won a National Assembly seat from Lahore against none other than Imran Khan and the PTI obsessively insists that the said seat was stolen through dubious means.

While questioning the speaker’s integrity, his critics conveniently failed to recall what had happened in the house on Wednesday. A bullying Maulana of the JUI-F, Mir Zaman, had been pressing the speaker to adjourn for Zuhr prayers. When the chair did not oblige he began reciting Azan while standing on his bench and then walked up to the dais for the speaker’s staff to prepare for leading the Namaz himself. The speaker could not dare reprimanding the bullying conduct of this Maulana and on Thursday, too, he was present in the house, loudly threatening to repeat what he had done the previous day. Ayaz Sadiq had to quickly adjourn the house to elude the blame of not “letting legislators pray on time.”

Ayaz Sadiq is not alone to fear the fanatically driven types. If you visit social media sites, each thinking mind in this country seems shocked over the killing of a human rights lawyer in Multan. Except a woman member of the PPP, not one member of our directly elected assembly could dare mentioning this murder, however, even when discussing “the law and order situation.” All of them prefer to stay put in ‘safe areas.’ And the PTI has all the capacity to enforce its agenda on the national assembly anytime.

Little wonder, then Shah Mehmud Qureshi went on refuting what Saad had tried to sell the other day and the house could not discuss any other matter due to the very limited time that national assembly gets for doing business on Fridays.

While correctly grasping the endgame of the PTI’s narrative of massive rigging in the May 2013 election, the PML-N is merely hooked to its own survival instincts, though. Most of them still fail to realise that while nonstop talking of alleged rigging, the PTI has finally switched to make us believe that the former chief justice of Pakistan behaved as the most influential partner of those executing the rigging plan. The story does not end here. Elections in this country are conducted under the supervision of judicial officers that chief justices of the provinces lend to the Election Commission as “returning officers.” serving district and session judges preside over the election tribunals where you go to seek relief with complaints against rigging. Imran Khan is forcefully building the feeling that the judiciary per se failed to provide him justice.

Under threat, therefore, is not the credibility of the May 2013 elections and the federal and provincial governments established through them exclusively. Far more important are the lethal questions, drummed against judges who acted as returning officers and now preside over election tribunals.

The unpleasant scenes that happened within the precincts of the Lahore High Court on Wednesday, in effect, reflected the accumulated fury of the PTI cadres’ vis-à-vis the judiciary. But no politician seems concerned about these attacks on an important pillar of the state, the independence of which we had begun taking almost for granted.