Son of the soil: A posthumous return home

Son of the soil: A posthumous return home

Singh’s home in Delhi was named Hadali House, a testam­ent to his abidin­g love for the place of his birth.
By Aziz Ur Rehman
Published: May 6, 2014
Tweet Email 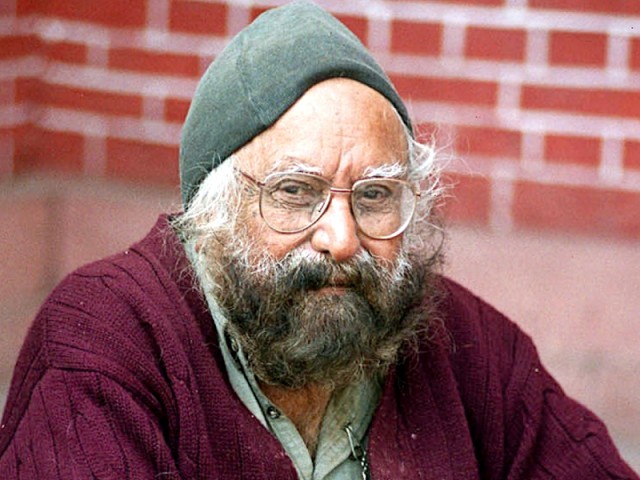 It didn’t matter if you were the prime minister of India: if you turned up at Khushwant Singh’s home in Delhi without a prior appointment, his family or servants would politely turn you away.

There, was, however, a loophole in this stringent rule. If you were a visitor from Hadali, a town of Khushab district, located 280 kilometres from Lahore, the doors of Singh’s house were wide open to you at any time. Singh’s home in Delhi was named Hadali House, a testament to his abiding love for the place of his birth, which fell to Pakistan upon the partition of India.

On April 22, 2014, in line with his wishes, a handful of Singh’s ashes were mixed into the material used to create a plaque, now installed at the author’s primary school in Hadali. Faqir Aijazuddin, former minister and former principal of Aitchison College was instrumental in this. His family and Singh’s family have had close ties for long. Thus, the resourceful Aijazuddin, along with his family, attended the funeral rites of Singh in India, and brought along some of his ashes to Pakistan.

Boys studying at Singh’s alma mater, where part of his ashes now rest, did not know about him. “We went to our teachers to ask about Singh, and found out who he was,” said boys of grade 10. Today, these boys wish to grow up to be like him. “It is a proud moment for us to know that a person like him has received education from this school.” Singh, a practising lawyer in Lahore on the cusp of India’s independence in 1947, drove from Lahore to Delhi alone at the time. The journey inspired Train to Pakistan, published in 1956, a record of the disturbing stories that Singh encountered as he migrated to India.

Partition did not diminish his love for his birthplace; if anyone spoke ill of Lahore or Hadali in his presence, Singh found it difficult to forgive the person. He would say that when he would read anything published against Pakistan in Indian newspapers, he would feel hurt, as a part of him continued to consider Pakistan his home. Many thought of him as a ‘Pakistani living in India’.

Thirty-nine years after Partition, Singh was able to return to Pakistan and his hometown of Hadali. “For me, the importance of Hadali is similar to the importance of the Holy Kabah for Muslims,” he said during his visit in December 1986. He spent the day at his former home and school and with the people of Hadali at a ceremony they organised to welcome home the town’s prodigal son.

Legend has it that Hadali got its name when after a war, bones of those killed kept lying in the area. They were buried here later. Hadaan (‘bones’ in Punjabi) of those who belong here deserve to be here. Ironically, part of Singh’s remains have come back here.

Hadali is not very well known. With a population of approximately 60,000, it is the third largest town of Khushab District.

“The kind of recognition that Singh brought to his birthplace, no one else could,” said advocate Mukhtar Islam Baali, resident of Hadali. Baali recalled the time when he accompanied Singh to his ancestral home in 1986. On the way, Baali kept testing Singh’s memory, asking him about the routes they were passing through. “He remembered every street and market correctly.”

Advocate Malik Muhammad Tahir Awan, a resident of Hadali, had the honour of hosting Singh briefly in 1986. “He would converse in Punjabi sometimes. Even if people were eating while standing at dinners in his honour, he would call for a chair to sit on and eat.”

When Muhammad Ali Asad Bhatti, a resident of Hadali and a poet, discovered that Singh was born in the town, he wrote him a letter. As he did not have the author’s address, he simply wrote Khushwant Singh’s name on the envelope and sent the missive to Delhi. Exactly one month later, in 1990, Bhatti received a response to his letter.

The two men frequently corresponded, a steady stream of letters making its way back and forth across the border. In 2002, Bhatti visited Chandigarh for the Punjabi Literature Conference and expressed his wish to meet his pen pal. The conference’s organisers discovered that Singh was in Simla at the time, but passed Bhatti’s request on to the author. A few days later, Singh arrived in Chandigarh. “We embraced like old friends,” Bhatti recalled, saying Singh wept as he spoke of Hadali during their time together.

It was during that meeting that Singh told Bhatti he wished to be buried in Hadali. His remains, he said, must become part of the town’s soil. This year, Singh passed away in Delhi on March 20th, at the age of 99.

His wish partially came true last month. Journalists, locals and officials from the district administration attended these last rites. Locals requested that the school be declared a heritage site and Singh’s house – demolished now, the plot of land is owned by another family – be converted into a library or a free dispensary.