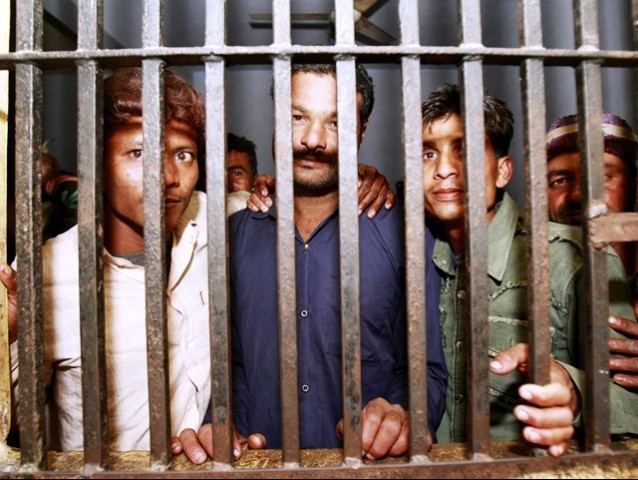 It is the matter of arrested fisherfolk from both countries who have inadvertently but unwisely crossed the invisible lines on the surface of the sea which are international borders. PHOTO: REUTERS/FILE

Of all the problems that hang around the collective necks of India and Pakistan, there is one that is capable of solution in reasonably short order, with no loss of face to either side, nor territory. It is the matter of arrested fisherfolk from both countries who have inadvertently but unwisely crossed the invisible lines on the surface of the sea which are international borders. The suspension of the composite dialogue between India and Pakistan is being cited as the latest impediment to resolution, but in reality it is as much to do with the protracted Indian elections which are likely to result in a change of the ruling party along with a slew of changes in terms of policy, both national and international.

Periodically, both sides make a goodwill gesture and release some of those they are holding, but neither side has ever emptied its jails of the fisherfolk they have detained. In response to a petition filed by the Pakistan Fisherfolk Forum (PFF), the federal government has told the Supreme Court that it is making efforts for the early resumption of the composite dialogue but it recognises that after the election there may be fresh mechanisms proposed by India which would nullify whatever advances were made in the short term. None of which is any comfort to our fishermen in Indian prisons. There have been no substantive talks on this matter since May 2012, but there was an exchange of lists on January 1, 2014 which revealed that 131 Pakistani fishermen were detained by the Indians. They give no details of the nature of the charges, or the date of completion of any of the sentences. Maritime borders are a hot-button issue globally and several are currently bubbling. For us and India, it is the festering dispute around Sir Creek that has netted these unfortunate men. The straying fisherfolk problem is never going to go away, but both our countries have the means of resolution in their grasp. On purely humanitarian grounds if nothing else, let these men go because nothing is gained by holding them.