Unappetising view: Restaurants more of a nightmare than pleasure

Unappetising view: Restaurants more of a nightmare than pleasure 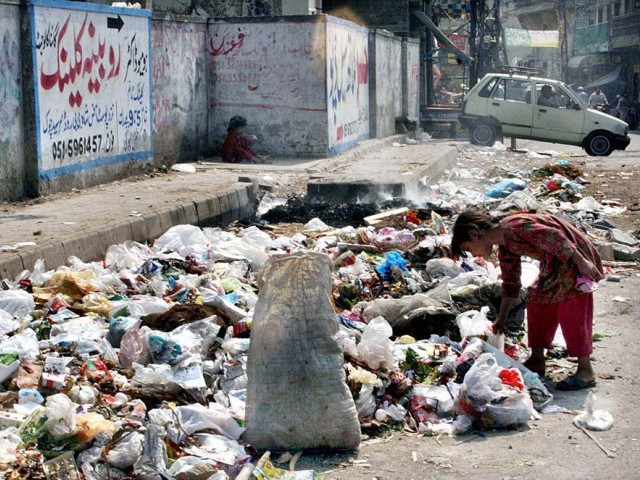 "CDA, PHA and TMA work hand-in-hand to clean the area before the arrival of any foreign dignitary, but they conspire to leave a stench in the air after the VIP is gone,” laments Muhammad Baqir from Dhoke Lilyal. PHOTO: APP/FILE

Roadside eateries, tea stalls, corner restaurants, basement cafeterias, and dining halls that have transformed Rawalpindi into a culinary park include some unusual spaces that have been transformed by restaurateurs.

Such places — small and grungy, able to hold only a small number of people who must order off equally small menus — are mushrooming and gaining popularity. The aroma coming out of them attracts passersby. But that isn’t what makes them unique. That ‘quality’ is the garbage piles beside them.

“I’m face-to-face with piles of garbage dumped on Shah Khalid Colony Service Road. This can’t be it. It just can’t. Who would run a restaurant from here? Surprisingly, it is being run by Bao Ji and Sain Ji, Kozi Haleem, Chaghi Restaurant and others,” says Farhan Rizvi, munching at a piece of roasted chicken at Sain Ji.

“Recently when the South Korean prime minister visited here, the piles of garbage were temporarily removed and the road was temporarily decorated with flowers, but the garbage reappeared soon after he left the country,” says Fakhar Abbas from Faisal Town.

“When I am in my city, I always look for places to eat that are nearby and do not trap visitors. I found such a place at Sain Ji.  The food was good, but I had to apologise to my guests for having taken them there because on the way back home, they had to bear unbearable stench,” says Rizwan Ali, a resident of Tajabad.

“My meal order was cooked to perfection by Bao Ji and was very well priced. Their claim to fame lived up to my expectations. I really enjoyed it. The only negative aspect was the garbage heap nearby,” says Kazim Reza from Dhoke Hafiz.

“Going to any commercial or residential area in the city is always frustrating. There we are, rubbing noses with garbage heaps. Finding places to properly dispose of garbage is the greatest challenge the city fathers are facing. Despite cleanliness drives every year, the city remains the same,” says Saqlain Haider, a businessman.

“This airport link road prides itself on being a VVIP road, but the messy roadside, unkempt green space, untidy road dividers and murky water tell a different story.

The Capital Development Authority (CDA), Parks and Horticulture Authority (PHA) and Tehsil Municipal Administration (TMA) work hand-in-hand to clean the area before the arrival of any foreign dignitary, but they conspire to leave a stench in the air after the VIP is gone,” laments Muhammad Baqir from Dhoke Lilyal.

“The garbage crisis has nothing to do with development, but more with lack of planning. The situation must be treated as a public health emergency. The city authorities should try to improve sanitation in the town,” says Hasan Alvi, a doctor.

“I have been told that the contract with the Tehsil Municipal Administration (TMA) for disposing garbage here has expired, but the dumping is continuing. The city authorities should regularly take a round of the town. If they visit, marketplaces, streets, roads and parks, they will find that sanitation is not up to the mark. Cleanliness drives must be made a regular feature,” says Adnan Zulfiqar, a resident of Tajabad.

“I have had trouble with the city civic bodies the most. They over-promise and under-deliver. They will tell you what you want to hear but never solve the problem,” says Hamza Taqi from Chaghi Restaurant.

“It seems that civic bodies are unaware that finding new sites to dump garbage is only part of the solution. They should set up new landfills as a substitute,” says Imam Hasan Zaidi, a college lecturer.