Shops and busine­sses remain­ed closed until after Friday prayer­s on MQM’s call.
By Our Correspondent / Photo: Athar Khan
Published: May 3, 2014
Tweet Email 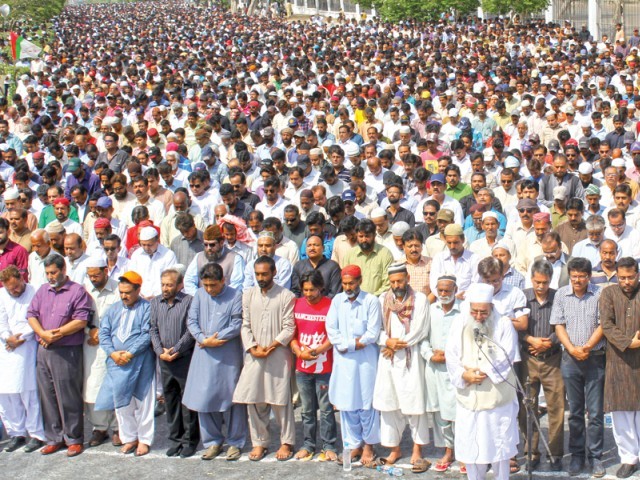 The funeral prayers of the remaining two victims were offered at main Numaish Chowrangi. They were held after Juma prayers and were lead by Maulana Tanvirul Haq Thanvi. PHOTO: ATHAR KHAN/EXPRESS

Nearly the entire city was shut down from Thursday evening till after the Friday prayers after the MQM announced a day of mourning to condemn the ‘extrajudicial’ killing of four of its activists. The four young men – Salman Qureshi, Sameed Ahmed Khan, Faizanuddin and Ali Haider – were identified as MQM workers at the Edhi cold storage.

Few incidents of aerial firing were also reported in different parts of the city that claimed the lives of at least two people while around five others were wounded. As a result, around 70 suspects were apprehended by the law enforcers. However, cases have yet to be registered against them.

The participants of the funeral on Friday then staged a protest, shouted condemnations against the incident and demanded the immediate arrest of the culprits. Strict security measures were made for the funeral prayers and law enforcers were able to successfully avoid any untoward incident.

“Today, we are burying our loved ones. Tomorrow, someone else will be doing this,” said a friend of one of the victims. “We know that after a while, all of you will forget these victims.”

He then went on to claim that the victims will not receive justice. “We have no hope of justice as those who are investigating these cases are the ones who are kidnapping and killing them.”

Following the funeral prayers, the MQM appealed to citizens to resume normal activity. After the appeal, business activities resumed as markets, petrol pumps and CNG stations opened once again.

Khan and Qureshi were later laid to rest at the Shuhada graveyard and the Karachi University Campus graveyard, respectively.

The MQM supporters in Hyderabad also observed a day of mourning as party workers hoisted black flags at various public locations. Markets and commercial centres remained shut and the mourning call was backed by transporters, who kept public transport vehicles off the roads.

Like Karachi, the Sindh Public Service Commission and the Hyderabad Board of Intermediate and Secondary Education also postponed the exams scheduled for Friday.

Incidents of aerial firing were also reported from Hyderabad, Mirpurkhas, and Tando Allahyar districts, while tyres were also burned in a few parts of Sindh.

In Hyderabad, two people were injured by stray bullets. Seven-year-old Soha, daughter of Abdul Aziz, was hit by a bullet while she slept at home. Abid Noor, 23, was hit in the leg in Noorani Basti. According to the Pinyari police, the attackers could not be identified.

An FIR over the abduction-cum-killing of the workers was registered at the Memon Goth police station on behalf of the state when the bodies were found. Sindh Chief Minister Syed Qaim Ali Shah ordered the police to find the men responsible for this crime and to arrest them under the Pakistan Protection Ordinance 2014.

“We are still waiting for the orders of senior officials about any changes that need to be made in the FIR,” the investigation officer of the case, inspector Raja Shahbaz, told The Express Tribune. “We do not have any evidence about the suspects involved in this incident yet.”