Revival of the ‘society girl’

Revival of the ‘society girl’ 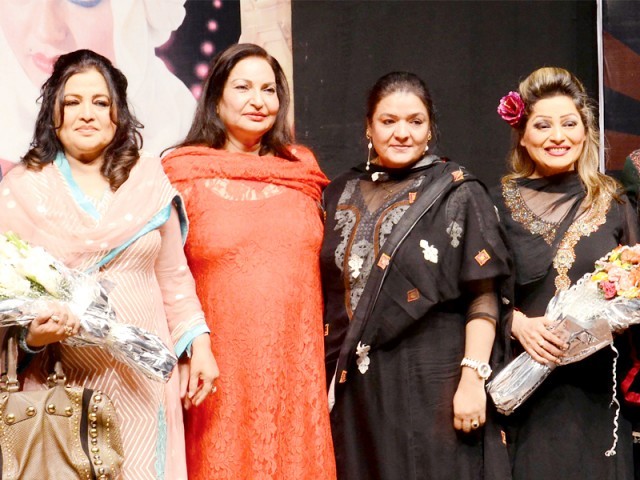 Sangeeta’s contemporary, Nisho Begum said that despite competition and struggles in the industry, she never saw Sangeeta give up. PHOTO: SHAFIQ MALIK/EXPRESS

There is something very distinct about Sangeeta — the woman who came to define Pakistani cinema. For a span of 20 years, while people spoke of Sultan Rahi, she made it through the industry and became an institution on her own. She came to the forefront of cinema in Lahore during a period of rampant chauvinism.

An event was recently held at the Al-Hamra Arts Complex to pay a tribute to the invincible Sangeeta. In recent years, she has been more of a spokesperson, advocating positions of the old industry and delving in television sitcoms rather than cinema.

It was the late 60s when she started as a child actor in the film Kangan followed by a role in Koh-e-Noor.  Her mother, Mehtab Rizvi was a determined screenplay writer, who had established a long-term relationship with the film industry. Sangeeta’s father, Tayyab Hussain Rizvi along with her sister Nasreen Rizvi, (also known as Kavita) and brother Raza Ali were affiliated with the film industry as well.

Actor Nisho Begum, Sangeeta’s contemporary and apparent rival, who is now locally known for her poetic genius, was present at the occasion. She expressed that as an actor, she had been insecure of Sangeeta’s stature, but her persistent envy meant that there was something awe-inspiring about her contemporary.

‘’We contested in the industry together, shared the same struggles, but never did I see her give up or surrender,” Nishoo said. “I think this is the reason why when I think of what we were doing and how, I speak with utmost pride and passion for my friend. She has continued to strive despite her illness and regardless of being told not to stress out excessively,” says Nishoo Begum.

By 1971, Sangeeta had shifted from Karachi to Lahore to become one of the more sought-after actors. During the resurgence of new-age Urdu cinema, she played high-profile roles along with the most seasoned actors of the industry, but her career changed with the film Society Girl. The duo of Syed Noor and S Suleman, a director that Noor was assisting earlier in the day, was searching for someone to make a film out of a script and then Sangeeta, a leading actor realised her bigger dreams.

“She was tall and quiet in those days, she had been told by her mother not to speak on the sets,” recollected Syed Noor. Noor had been working on a script that he was told could possibly be turned into a film.  He recalled that while driving to Madam Mehtab Bano’s house one day, Sangeeta’s mother had expressed her views on the script and suggested that a good director should make the film. Despite entering the pre-production phase, the film was cancelled right after it was initiated.

‘’At that time, I remember feeling sad about the film and that is where I got to know Sangeeta,’’ stated Noor. On the sets of Tere Mere Sapnay, the film Sangeeta was starring in and he was assisting in, they began to discuss the idea of making a film together.

Sangeeta then had to convince her parents on the project. Her mother eventually agreed to support her while her father said it would be a waste of time and money.

“We were really dedicated to what we were doing in those days. There was nothing that could distract us. I used to wonder why we never fell in love,” laughed Noor.

Society Girl became the launching pad for Sangeeta, the first female director from Lollywood. That period was followed by several successful films directed by her, including Muthi Bhar Chawal in 1978. After a phase of predominantly Urdu films, she contributed significantly to Punjabi films. Though a critical review of her work would be interesting, it is the context and progression of Sangeeta’s success that matters the most.