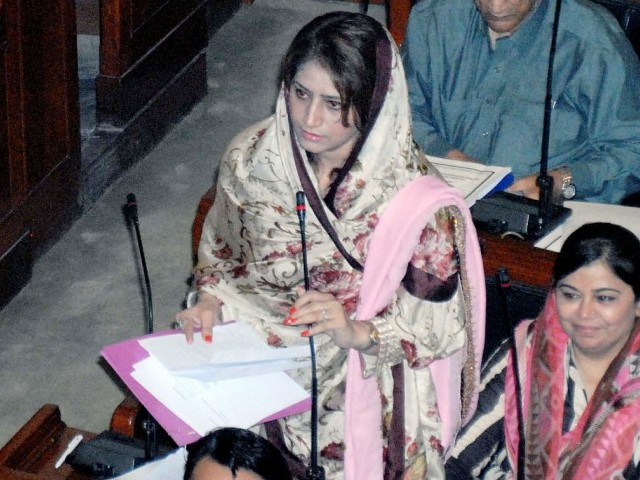 Rubina Saadat Qaimkhani, who is also the minister for social welfare and women development, presented teh bill along with Sharmila Farooqui. PHOTO: NNI

The Sindh Assembly unanimously passed a law on Monday declaring marriage below the age of 18 years punishable by law and a violation of the rights of children, becoming the first province to do so.

Both the bills were introduced last year and were referred to a special committee, headed by the social welfare minister, to start consultations with civil society organisations and law experts. The committee comprised of members of the Pakistan Muslim League – Functional, Pakistan Muslim League – Nawaz, Pakistan Tehreek-e-Insaf and the Muttahida Qaumi Movement, retired judges, religious scholars and representatives of women’s rights organisations. After three meetings, the members drafted the bill.

Once the bill becomes law, any victim can file an application before a first-class, judicial magistrate. The offenders can neither be granted bail nor  allowed to reach a compromise and grant pardon.

“Whoever contracts a child marriage or facilitates it shall be punished with rigorous imprisonment that may extend up to three years,” the law states. Giving a briefing on the objectives of the law, parliamentary affairs minister Dr Sikandar Mandhro said the government wanted to protect the basic rights of children when drafting the law.

It will be applicable to parents, guardians or any other person who, in any capacity, promotes marriages of both boys and girls who are under the age of 18 years. The trial cases registered under this act will be concluded within 90 days.

Qaimkhani appreciated the role that the male lawmakers played in framing the law. Even during the debate following the bill, the MPAs insisted the law should be strictly implemented.

“Most people within our ranks deal with jirgas that solemnise the marriages of minor girls,” pointed out PPP’s Nadir Magsi, adding that nearly 80% of the child marriages are not even reported in Sindh. “We want to see proper implementation of this bill.”

Magsi suggested getting the media on board to inform people of the law. “Change in our society can only be possible when cases are registered against parents and the people holding jirgas,” he said.

Information minister Sharjeel Memon promised a three-month-long campaign on this law in newspapers, radio and television channels. “We will issue advertisements in the newspapers from Tuesday (today),” he said.

PTI’s Dr Seema Zia talked about how necessary it was for the couple to consent to the marriage while Faruqi, who also moved a similar bill, called the day a historic one for the assembly. “Apart from the vigorous punishment, the fines have also been increased from Rs1,000 to Rs45,000,” she said.

The opposition members staged a token walkout from the Sindh Assembly session against the ‘copy culture’ in exams. As the session started with deputy speaker Shehla Raza in chair, PML-F’s Nusrat Seher Abbasi moved an adjournment motion.

“This is a recent and a public-interest issue,” she said. “Even after the imposition of Section 144, copy culture flourishes every day. The teachers, parents and the district administration are helping students use cellphones during their exams.”

Education minister Nisar Khuhro told her that the department and the chief minister have taken notice and formed vigilance committees. “Please do not use the word ‘culture’ with ‘copy’,” he added. As Murad Ali Shah was filling in for Raza, he dismissed the motion in haste, which irked the opposition members. They staged a walkout in protest.