Roxen talks about making music for Bollyw­ood and the releas­e of its long-awaite­d solo album.
By Sher Khan
Published: April 23, 2014
Tweet Email 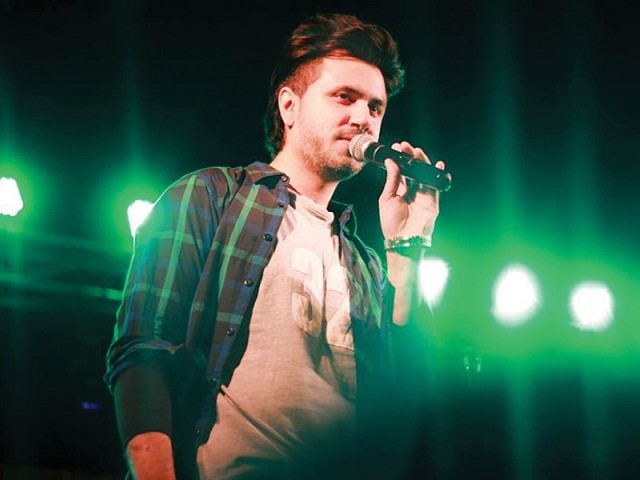 Mustafa lent his vocals to a song in Shootout at Wadala last year, among other films. PHOTOS: PUBLICITY

The Pakistani music scene has undergone a sea change. With the emergence of music sensations through social media, ‘band’ culture in the country has been put on the back burner. Music bands such as Aaroh, Jal and EP, which were once hailed for their exhilarating music, have fizzled out.

Amid this unfavourable environment, one band has managed to stand tall — Roxen. The band’s lead vocalist Mustafa Zahid has been in high demand as a playback singer across the border, but he has managed to prevent the band from disintegrating. Contrary to popular belief, Mustafa believes that bands are still a potent constituent of the music industry. “How can anyone say that bands have died? It’s like saying that music has died. You just have to be willing to adapt to the audience’s demands,” says Mustafa. The band produced music for films like Murder 3 and the frontman lent his vocals to songs in Aashiqui 2 and Shootout at Wadala.

Commended by Pakistani and Indian audiences alike, Roxen continues to play an important role in reviving the role of bands in the music industry. “There was a time when bands, [such as, EP, Noori and Fuzön) had surfaced and music by bands was trending, but one has to be willing to evolve with changing trends and understand the people who are listening to one. These bands need to realise what their market is,” Mustafa feels.

Debuting with music album Rozen-e-Deewar in 2006, the band has come a long way. Now, Roxen is looking towards the worldwide release of its album Bhoola Sumundar, which is scheduled for August, post Eid-ul Fitr. Mustafa shares that the eight-year-long hiatus between the releases of Roxen’s two albums is because the composition of the band has undergone a few changes. Guitarist and backing vocalist Shahan Khan, who joined the band in 2009, added a unique dimension to the band’s sound, complementing the guitar riffs of Haider Halim.

“We have maintained a blend of pop rock and ballads [in the album songs]. It’s very important that we produce this album as a commercial one. We were originally an underground band that made it to the mainstream because of our [first] album.”

Mustafa feels that Roxen essentially caters to two audiences: one that connects with the band due to its rock and roll genre; and the other that hears its music only because they have heard his Bollywood film music. “So, [through the album], the best thing to do is that we find something in between that would satisfy both the audiences.”

Shahan says that even with changes and commercial compulsions, the sound for the albums is characteristically Roxen. He says that the band members do not follow a disciplined [work] routine, but the camaraderie between them has continued to grow.

“I have only added a few [new] things to the album. The sound is in complete harmony with what Roxen is known for. People used to say that we were becoming a ‘Jal-type’ band, but we really have stuck to the basics,” says Shahan. The band has stood the test of time due to the fact that its members don’t experiment unnecessarily and simply continue to do what’s known to them. “We tour a lot. If an idea or sound inspires us, we work on it; I don’t think art can be planned,” he adds.

Here are some of our favourite Bollywood
songs by Roxen: