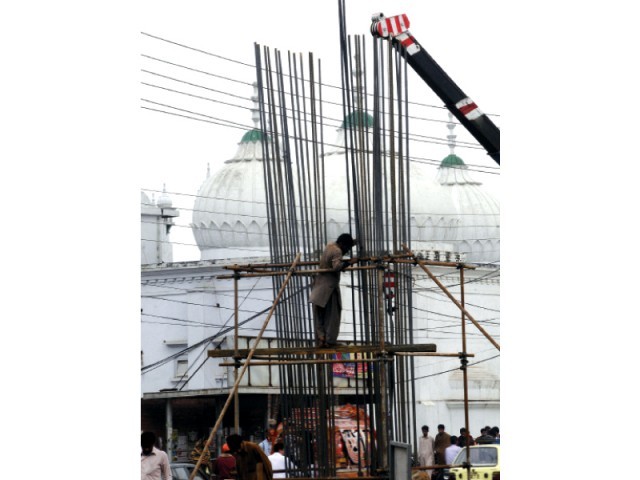 Work in progress on the metro bus project on Friday. PHOTO: AGHA MEHROZ/EXPRESS

To construct a portion of the Islamabad- section of the multi-billion metro bus project, Rawalpindi Development Authority (RDA) has hired a firm blacklisted by a Punjab government department.

The Punjab Emergency Service (PES) had blacklisted Habib Rafique in December 2012, for delaying work on the construction of the Emergency Services Academy building in Thokar Niaz Baig, Lahore.

The firm was blacklisted for three years and it was decided that it would not enter into any deal with the Punjab government nor register the company under any other name.

Sources said the firm was given a 10-month contract on April 29, 2010. The construction firm failed to complete the project even within two and a half years. During this period on the request of the firm, the Project Steering Observation Committee extended the time of completion several times but to no effect.

Before it was blacklisted, notices were issued to the firm but its representatives did not come up with any satisfactory answer for the delay. This was conveyed to the Pakistan Engineering Council (PEC).

On April 10, the construction firm participated in the bidding process for the metro bus project after forging a joint venture with two other firms, Metracon and China Railways First Group.

They won the contract for offering the lowest bid, which was slightly lower than the approved amount of Rs3.95 billion, for the construction of a dedicated corridor for metro buses from Centaurus Mall to Shaheed-e-Millat Secretariat on Jinnah Avenue.

Rawalpindi Commissioner Zahid Saeed, who is also the project director for the metro bus, stated the issue came to his knowledge after the tendering process was completed.

He said, according to his information, around four months ago Habib Rafique obtained a stay order from the Lahore High Court (LHC) against the decision. When the firm initiated the process of obtaining tender documents it had a valid stay order, he added.

On April 4, just five days before the tender documents were to be opened, PES communicated their concern to us, he said. “PES reiterated that the department had blacklisted the construction firm for three years,” Saeed added.

When Saeed was informed that the LHC had disposed of the case without granting any relief to the firm, he said he wasn’t aware of the development. RDA, the executing agency of the project, will look into the matter in its next technical committee meeting, he added.

When contacted, Shahid Rafique of Habib Rafique said Zahid Rafique was looking after the project. Despite repeated calls and text messages, he was not available for comment.