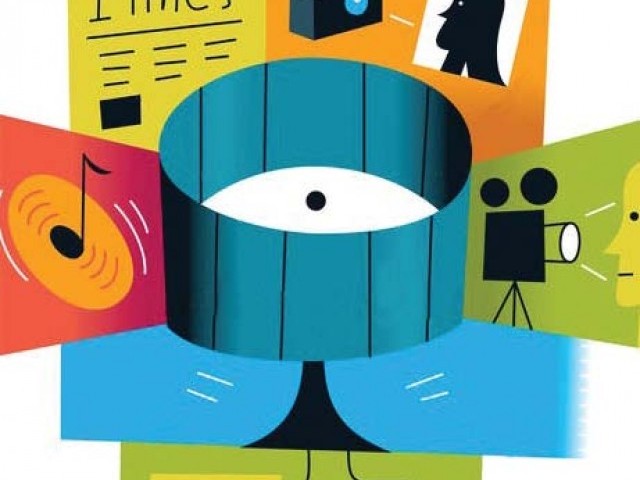 Study launched to educate people about media ethics and dynamics

ISLAMABAD: A pilot study was launched on Thursday in an attempt to make the public more ‘media literate’.

Titled Talking Back: Giving Public Context To Media Content, the panelists at the launch of the study said civil society should coordinate with the government and judiciary to hold media outlets accountable and better understand their political slants.

Media related education should be added to the curriculum at all educational levels, the speakers said.

Expressing concern about the layman’s ability to understand the powers and motives of the media, they urged for an institute to hold media outlets accountable for their actions.

Talking Back: Giving Public Context To Media Content, is a first ever pilot study based on research that was conducted by Uks – a research, resources and publication centre working on gender equality and women’s development. It uses data collected over the duration of a year and involves six universities of Pakistan.

Speakers were of the view that some media organisations favoured specific politicians and content. Even anchors seem to be manipulating opinions, they said. All this should be avoided because it is “biased and unethical.”

Speaking on the occasion, Tasneem Ahmer said when Uks started analysing the concept of media literacy, they realised that while the audience was bombarded with media content, they had no idea that as viewers they had the right to comment, critique and influence the content.

“Media literacy is the only tool that can equip audiences with the skill of analysing the content of the media,” she said.

“We are not against the media; through this pilot study we just want to initiate a culture of dialogue between the civil society and media about their existing trends and ethics,” she added.

Ahmer said the study offered an understanding of how mass media drove the consumer economy and vice versa.

She said the aim of this pilot study was to empower viewers with the ability to accept or reject content, ranging from live reports on terrorism to representation of women in soaps and popular digests.

“Media’s responsibility is to give information to the general public, not to give its judgment over issues and create panic,” said Ahmed. He accused the current media of being insensitive towards the impact of their content on viewers.

“The concept of breaking news is badly affecting the viewers and has increased a sense of insecurity among them,” he said. He feared that all this was adversely impacting democracy.

Anjum said, “Our audience is not at all media literate; they lack the sense of judging things and consider everything they watch or hear to be authentic and true.”

During her study Anjum found that the youth enjoyed talk shows in which politicians were humiliated.

She said, “There are many social issues which can be addressed through talk shows but since the public does not seem interested, media owners invest in more profitable ventures.” She questioned the social efficacy of profit motivated media groups and felt that all politicians had been enveloped in a villainous role – a generalisation that she felt was unfair.

The bridge between the West and the Islamic World