The Pakist­ani boys steppe­d up their game and defeat­ed them 3-2.
By Web Desk
Published: April 4, 2014
Tweet Email 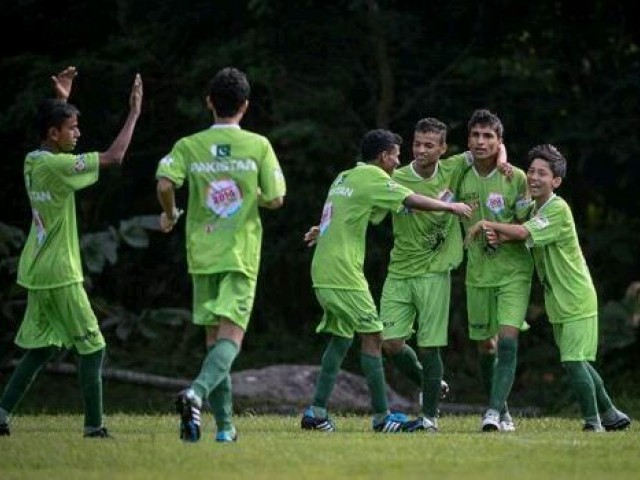 The boys will face the US in the semi-finals on Saturday.

RIO DE JANEIRO: Pakistan edged Philippines on penalties to win the quarter-finals of the Street Child World Cup (SCWC) on Friday and are now through to the semi-finals.

FINAL SCORE: Pakistan 3:2 Philippines on penalties after going to extra time when they drew 1:1. Pakistan go through to semi finals!

After full time and extra time, the sides were locked 1-1, forcing the game to go to penalties. Pakistani boys stepped up to spot and converted three of their kicks. Philippines could only score two of their penalties.

The Pakistani team have been dominating the SCWC. Previously, they beat Kenya 2-0 in their second match of the tournament.

Azad Foundation official Ali Bilgrami, who is currently with the team in Brazil, said that the players have gained confidence with their second win in the tournament.

“In our match against Kenya, the opponents kept blocking and manhandling Abdul Raziq who scored eight goals for us in the previous match,” Bilgrami told The Express Tribune.

“But our players are very fast and Aurangzeb scored brilliant goals for the team. Our players are more confident now, and I hope this tournament and experience in Brazil will remain with them for the rest of their lives.”

The SCWC is featuring 20 teams. The event aims to provide an identity to street children all over the world.

On Friday evening, Twitter was ablaze with many supporters and fans taking to the social media site to show their support.

Pakistan into the last 4! Karachi boys making us proud for once! #StreetChildWorldCup #Pakistan

Pakistan through to semi-finals of #StreetChildWorldCup after beating phillipines on penalties .

YESSSSSSSSSSS! PAKISTAN THROUGH TO THE SEMIS. #StreetChildWorldCup

Pakistan will go head-to-head with the US in the semi-finals on Saturday, April 5.

Did you know? : Asad Ahmed launches his own mobile app