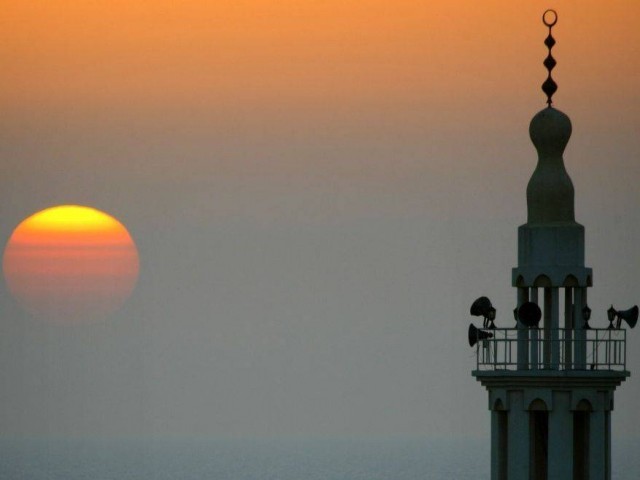 OTTAWA: Canadian Muslims have erected the Arctic’s first minaret, atop a little yellow mosque which serves as spiritual home to the area’s fledgling Islamic community.

The mosque arrived in Inuvik last month to serve a growing Muslim population in Canada’s far north, after traveling 4,000 kilometers (2,485 miles) over land and water.

The minaret, built locally and installed this week, has four levels and stands 30 feet (10 meters) off the ground.

“It’s really beautiful when we turn on the lights in the dark,” Amier Suliman, a mosque committee member, told AFP on Wednesday.

Only finishing touches, such as applying a second coat of paint inside and hooking up bathroom plumbing, remain before the mosque’s grand opening next week.

“This is the first minaret to be erected in the Arctic,” Suliman said gleefully by telephone.

“Some will say it’s a new frontier for Islam,” he commented. “But for me what is significant is that Muslims here who once prayed on Fridays at a local Catholic church or in a trailer now have a proper place to worship, with a proper minaret.”

“Now we have a home to worship in our own hometown. That’s the most important for me.”

The number of Muslims in Inuvik, a town of 4,000 inhabitants in Canada’s Northwest Territories, has grown steadily in recent years to about 80 and they no longer fit in an old three-by-seven-meter (10-by-23-foot) caravan used until now for prayers.

The congregation could not afford to build a new mosque in the town, where prices for labor and materials are substantially higher than in southern parts of Canada, project coordinator Ahmad Alkhalaf said previously.

But they found a supplier of prefabricated buildings in Manitoba that said it could ship a structure to Inuvik for half the price of building a mosque from scratch on site.

And so, at the end of August the tiny yellow mosque’s voyage began on the back of truck, winding through the vast prairies and woods of Western Canada toward Hay River on the shores of Great Slave Lake, Northwest Territories.

From there it was transferred onto a barge and floated down the McKenzie River to Inuvik, about 200 kilometers (124 miles) north of the Arctic Circle.

The worshippers, who are largely Sunni Muslim immigrants from Sudan, Lebanon and Egypt who moved to Canada’s far north in search of jobs and economic opportunities, are to hold an open house on November 5.

The facility will also double as a Muslim community center.