Xeesha­n’s target market is Karach­i — he thinks the market is easy, they are sorted and they know what they desire.
By Saadia Qamar
Published: April 1, 2014
Tweet Email 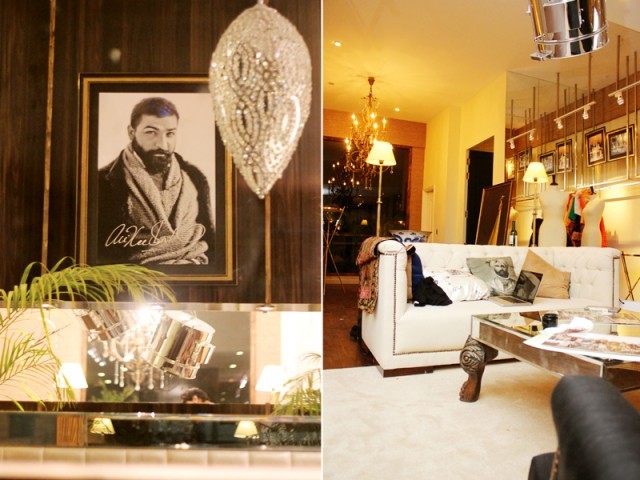 Xeeshan’s target market is the city of lights — he thinks the Karachi market is easy, they are sorted and they know what they desire. PHOTO: PUBLICITY

As we entered Ali Xeeshan Theatre Studio, the ambiance was such that it made you feel like a Wazir in attendance from the Mughal era. The studio was set with a couch and a large sofa, with a large chandelier on each side. Images from his shoots adorned the walls and it was hard to overlook the very aesthetically structured mirrored walls and reflective tables, which bounced your smiling reflections right back at you.

Hanging on the racks were his loud pieces from his previous fashion week showcases, including some pieces from Panchiyat and Jagir collections.

He made an entry dressed in a casual pair of shorts and a shirt, sporting ruffled hair; his look seemed just about right for a person who had to be on a flight back to Lahore in the next couple of hours.

The very first question one may be intrigued to ask him is, why Karachi now? Xeeshan addressed this question and replied saying, “I have been getting great responses from people via Facebook. My potential clients are based here, some even fly to Lahore, but essentially, most of them don’t. The first session I had with my clients, was brazed with back-to-back appointments.”

Ali Xeeshan Theatre Studio is strictly appointment based; it is not a walk-in studio. He will be visiting Karachi from the 15th till the 20th of each month, where he will be meeting his prospective clients. If you place an order, it will take about six weeks for the final product to be delivered.

If all goes well, his next stop is Dubai, he asserted without a qualm, but for now, he is more inclined towards bringing out his lawn, owing to the overwhelming response he received last year. Regardless of how he is primarily based in Lahore, the launch will take place in Karachi this May. “To be honest, in Lahore, people really don’t know what they are looking for; you need to tell them. However, the Karachi market is easy that way, they are sorted and they know what they desire,” said Xeeshan. “My story goes better with them, they will buy just a piece, say a sari and the next time you spot them, they will be seen wearing it as a dupatta. They essentially know how to multi-use the fabric,” he added.

We asked him if he agrees that his Jalal Collection shown at FPW6, done up in oranges was more appropriate for bridal week than fashion week? To which he asserted, very humbly: “No, it wasn’t! It was completely sold out. It was a very hip and happening collection, but when all the pieces came together it gave a wedding-wear appeal.” He continued saying: “It was essentially luxury pret. Yes, I can’t stop myself at this point  — It has to be luxury pret for me!”

When speaking of brides, grandiose and luxury pret, we asked why his studio bears such a grand and royal look, to which Xeeshan replied, “You see royalty is in our DNA; it is our heritage. Every bride wishes to look like a princess on her big day and that’s something not to be missed.”

As we concluded, we asked for some insight on what will be soon coming from his end. He revealed that he will be showing at PFDC in April this year and that collection will focus on the golden age of Pakistani cinema, capturing the time period between the mid 1960’s to early 1970’s. “I will be avoiding volumes in this collection  — I will play with less fabric and my hemlines too will go higher,” he said.