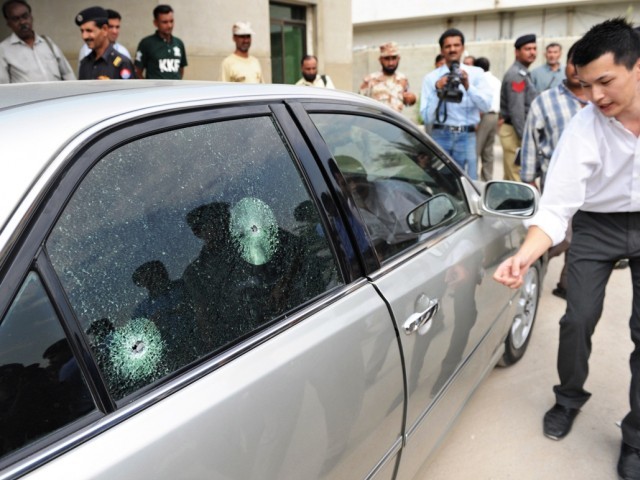 A Japanese consulate official examines a bullet-riddled diplomatic car at a local hospital in Karachi on October 28, 2010. PHOTO: AFP

At least $2,400 and Rs27,000 were robbed from a car belonging to the Japanese Consulate in Karachi on Thursday morning.

The driver and the guard, sitting in the car, were injured in firing while the administration officer narrowly escaped the bullets.

The silver Toyota Mark II pulled up at a bakery near Cantt Railway Station, which is located close to the Japanese consulate on Abdullah Haroon Road, a high-security zone. The employees stopped to buy bread when unidentified bandits on a motorcycle held them at gunpoint. The bandits opened fire at the guard upon resistance.

The wounded men were taken to Jinnah Postgraduate Medical Centre, where the chief of accident and emergency Dr Seemin Jamali said that the victims were identified as Gul Muhammad and Ghulam Haider. They were shot in the abdomen and shoulders, she said.

A senior Japanese diplomat, Toshikazu Isomura, told AFP that the wounded men were not Japanese. “They were local employees, no Japanese diplomat was in the car,” he said. “It appears to be a burglary attempt.”

The police have yet to register the case but Leghari assured that they are looking into it.

He added, however, that it seems to be a case of a routine robbery. The police have impounded the vehicle.

According to Online news agency, the consulate employees were coming back from a money exchanger when they stopped to buy bread, said TPO Saddar SSP Javed Akbar Riaz. He believed the bandits may have been following the car for some distance.

The Japanese Consulate is located near the Cantt Railway Station on Abdullah Haroon Road.

Additional input by Online and AFP

Now is the chance to build Sindh better