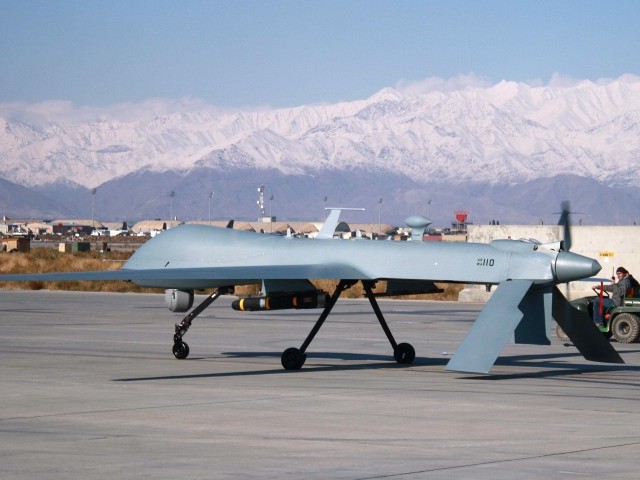 Around 35 such attacks since September 3 have killed more than 185 people. PHOTO: AFP

MIRANSHAH: Seven people were killed in a US drone attack on an alleged militant compound in North Waziristan.

Two missiles were fired on the compound in Ismail Khel village, about 40 kilometres (25 miles) west of Miranshah, the main town in the North Waziristan region bordering Afghanistan, they said. “The target was a militant compound,” one official said. The dead include Arabs, Afghans and locals.

It was not immediately clear if the casualties included any high-value targets, officials said. The region is considered a stronghold of militants linked to the Taliban and al Qaeda who are involved in attacks on US and Nato forces fighting militancy across the border in Afghanistan.

US drone strikes killed up to six militants in Pakistan’s tribal belt on Wednesday, targeting the extremist Haqqani network and a compound harbouring foreign fighters, officials said. “They were from the Haqqani network,” the senior security official said on condition of anonymity.

The covert US drone campaign stepped up strikes in Pakistan’s tribal belt on the Afghan border last month over intelligence claims of a Mumbai-style terror plot to launch attacks on European cities.

Around 35 such attacks since September 3 have killed more than 185 people, according to an AFP toll. Around 150 drone strikes since August 2008 have killed more than 1,200. The United States considers Pakistan’s tribal belt an al Qaeda headquarters, and Western officials say the drone campaign is seen as integral to US-led efforts to beat back a nine-year Taliban insurgency in Afghanistan.