﻿Thinking about the big move: The Sikh way of life changing in Khyber-Pakhtunkhwa

﻿Thinking about the big move: The Sikh way of life changing in Khyber-Pakhtunkhwa 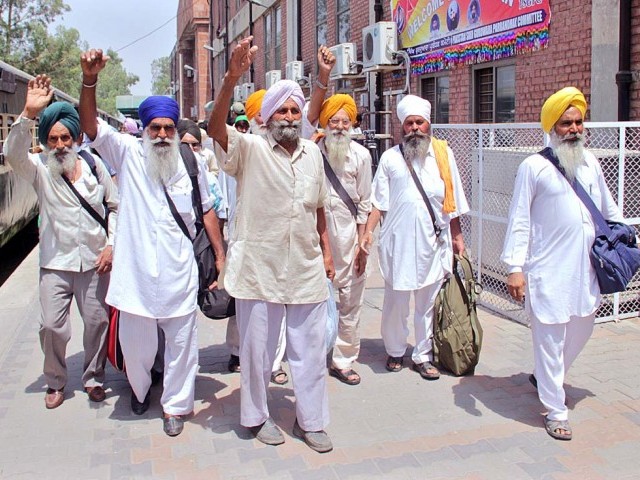 SHABQADAR: Ranjit Singh’s court was one of the most magnificent in the world. The Raja had scarlet tented pavilions set up on gold and silver poles near the river.

His courtiers walked around like glittering jewels. He created an atmosphere of religious tolerance in which Hindus, Muslims and Sikhs lived together in harmony.

They settled in Peshawar, Orakzai, Kurram Agency, and North and South Waziristan and since then, have made a name for themselves in the fields of herbal medicine and cloth.

This year, the Sikhs of Khyber-Pakhtunkhwa feel that the harmony has been disturbed. Harjeet lost his brother, Paramjeet, also a hakim, in a target killing incident on March 13.

“We have been living here forever,” he said. “Our ancestors died here and while we never wanted to leave the area, we might have to because of the security concerns.”

He added that they did not want to leave the land of their grandfathers, and while it breaks their hearts, if the situation remains miserable for them, they will have to do so.

Paramjeet Singh was gunned down in Shabqadar in the middle of the bazaar by unidentified men. His employee was also killed. This led the Sikhs of K-P to stage a silent protest against target killings.

On March 14, they carried black flags and demanded the government should protect them and other minorities. Before Paramjeet, there was Baghwan Singh, a Sikh hakim who was shot dead by unidentified men in Charsadda’s Tangi Bazaar on January 22.

The police said that he was a resident of Dabgari and ran a medicine shop in the bazaar. He was on his way home in the evening when two men opened fire at him. A few weeks later, two Sikh hakims were kidnapped from DI Khan.

They were in the area for business when the incident took place and are still missing. According to Hardyal Singh, the situation was alarming. “We are a minority,” he said.

“Last month, Bhagwan Singh was shot by target killers, and then two Sikhs were kidnapped from DI Khan in the same month.” He added that incidents of Sikh kidnapping and killings were on the rise and had become more so in the last few months.

In the past, he said, Sikh families from Kurram and Orakzai agencies were forced to flee the tribal region because of unrest.

Many families sought refuge at Punja Sahib in Hasanabdal, Punjab. Right now in Peshawar there are about 200 Sikh families. The chief minister, for his part, asked the police to find the culprits.

When contacted, an official from the Tangi police station told The Express Tribune that they had registered an FIR against an unidentified person for Bhagwan Singh’s murder and had to close the case as they did not know the identity of the killer and no progress was made in the investigation.

In a conversation with the Shabqadar police, it was learnt that the chief minister had given them three days to find those responsible for killing Paramjeet.

But so far the police have had no luck.

Haider Khan, an official from the Shabqadar police station, said the DPO had put together a special team for the case and they had traced some suspects but he was not in a position to share the information.

He did, however, add that the hakim did not have any personal enmity and he might have been killed because of his faith. Mahmood Khan, who has worked with Paramjeet, said that he had enjoyed his time with the man as he was peace loving and would never hurt anyone.

He added that Paramjeet’s patients would really suffer and those who had made progress would now have to find another doctor for their ailments. Paramjeet’s brother, Harjeet said that he was not satisfied with the police investigation.

He added that there was no positive response from the government. The district police official of Charsadda, Shafiullah said the deadline set by the chief minister had passed and they had traced a suspect and would reach the main culprit.

He refused to share further details. According to Dr Soran Singh, the adviser to the CM on minorities, there are about 25,000 Sikhs in the province – mostly in Buner, Swat, DI Khan, Bara, Khyber, Kurram and Orakzai agencies.