A chappal ain’t just a chappal

A chappal ain’t just a chappal 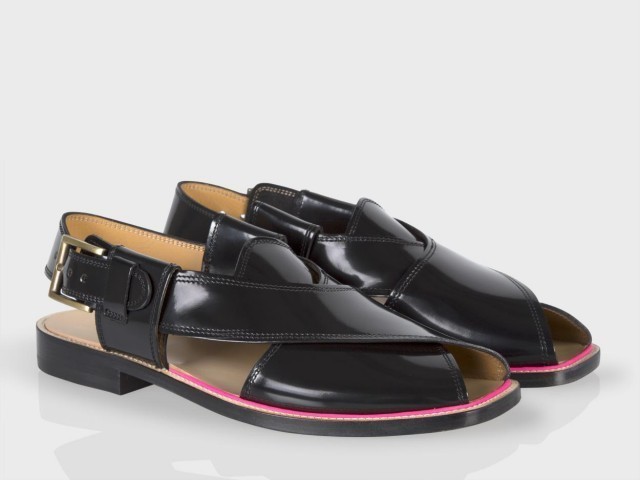 Ethically, Smith should have recognised the chappals ‘Peshawari’ merits before christening them ‘Robert’.

Paul Smith’s fashion faux pas broaches an onerous lesson for Pakistan: it takes nothing less than foreign validation for us to value something of our own. Everyone from the Pashtun dwellers in Charsadda to those living in Karachi saw their eyebrows disappear right into the hairlines when the cross-strapped Peshawari chappal was marketed by a British fashion industry bastion as ‘Robert sandals’ for a mighty 300 pounds.

Indeed, Paul Smith had reproduced a Pakistani design, blurring the line between imitation and inspiration. When a Pakistani designer lifted a motif on its lawn collection from a Spanish brand in 2013, tongues wagged, condescending Pakistan’s ‘predilection’ to plagiarism. But creative lifting, it seems is not a Pakistani, or a ‘Third World’ phenomenon. However, having said that, Smith perhaps, does not deserve the jingoistic tirades directed at him owing to two reasons: because he confessed to having ‘borrowed’ the design within 24 hours and because, the fact of the matter is that Pakistan has no ‘copyright’ on the design of the Peshwari chappal. Ethically, Smith should have recognised the chappals ‘Peshawari’ merits before christening them ‘Robert’. But on the other hand, Pakistan is also blameworthy for languishing under the assumption that its cultural symbol was not valuable enough to be pilfered and for taking no measures to prevent such occasion.

Likewise, years ago, Pakistan dilly-dallied in securing a patent for basmati rice which was expeditiously chartered by India, promising to trump one of Pakistan’s prime exports. We don’t build any forts and moats, but unsheathe our sorry patriotic daggers in ‘love for the country’. Officials holding portfolios of culture must do more to secure designs of cultural elements like the Peshawari topi or the paranda. Unless this is done, these garbs hold the status of being strictly functional forms of apparel and will be open to all for inspiration or imitation of any and every kind.