Armed with the original Peshawari Chappals, businessman fights back

Armed with the original Peshawari Chappals, businessman fights back 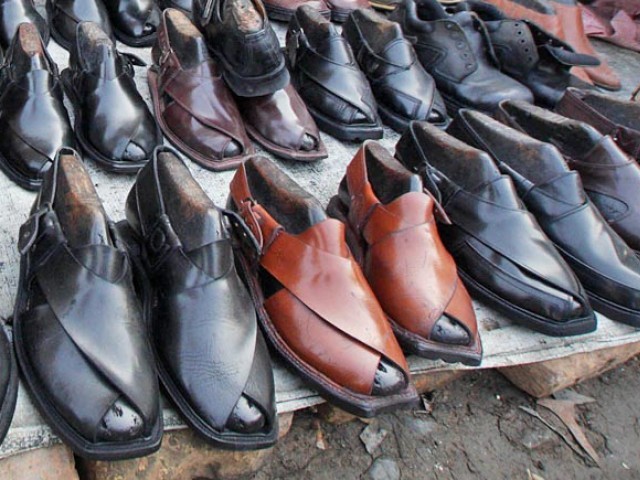 At least one Karachi-based company is in talks with a lawyer to see if Smith could be sued for using the sandals’ name and design, which originate from Khyber-Pakhtunkhwa. PHOTO: ONLINE/FILE

KARACHI: Peshawari Chappal, the standard pair of sandals widely worn by Pakistani men, is set to pit local businesses against renowned British fashion designer Sir Paul Smith who used the design to market his own products.

At least one Karachi-based company is in talks with a lawyer to see if Smith could be sued for using the sandals’ name and design, which originate from Khyber-Pakhtunkhwa.

“Somebody has to take an initiative,” said Omar Farooq, the CEO of Chase Value Centre, a small-scale retailer. Farooq’s extended family manages the much bigger business of Chase Up.

“At the moment, I am not sure if we can actually sue Smith but we will meet our lawyer in a day or two to see if there is a possibility.”

Smith, the menswear designer, has put up the Black High Shine Leather Sandals up for sale on his website for £300 or Rs49,500.

There is hardly any difference between the average Peshawari Chappal made at hundreds of small workshops across the country and Smith’s product except for the ‘neon pink trims’ added to the British version.

Description on the designer’s website mentions it has been inspired by Peshawari Chappal.

However, local fashion designers and commentators unleashed a barrage of criticism against the designer for not attributing the sandal with Pakistan when he first marketed it. Reportedly, Smith had named the sandal Robert before the website was updated.

Chase’s Farooq is hoping to draw attention towards what he sees as a violation of the country’s rights.

“I’m not a lawyer but if Smith decides to get a patent and we prove that we’ve been selling the same thing for years then he has some explanation to do.”

Like most others, Chase sells a 100% leather-made pair of Peshawari sandals for Rs995, literally making it impossible for the high-end English brand to make any significant inroads in the local market.

The story surrounding the sandals is reminiscent of what Pakistan’s Basmati rice exporters have faced in recent years.

Yawar Irfan Khan, senior partner of Lahore-based United Trademark and Patent Services, says the case of Peshawari Chappal, just like rice, revolves around the geographical indication (GI) – the place from where the product originates.

“This sort of an issue should be taken up by the Intellectual Property Organisation of Pakistan,” he said. “It is just like scotch whisky. You can put whatever brand name you want on it but its Scottish origin doesn’t change.”

Governments vigorously pursue GIs to add value to their products, he said. “Here, I would also blame our own entrepreneurs who pay little attention to copyrights and patents.”

According to IPO Pakistan’s Controller of Patents Sabir Gul Khattak, no one has applied for the copyright of Peshawari sandals yet.

“That designer must have registered the sandals in England so he can sell it. I don’t think we can do anything about that,” he said. “The main issue is that our people don’t register brands and products and then create a fuss when something happens.”

But Khattak said that GI could be used by the government to claim its people have the right to make and sell Peshawari sandals. It remains unclear if Paul Smith has sourced his supplies from Pakistan.

Islamabad’s track record in defending its products is poor and there are fears that attempts to sue or drag Smith in a legal battle would be futile without active official support.

However, Chase’s Farooq believes in sending a message across.