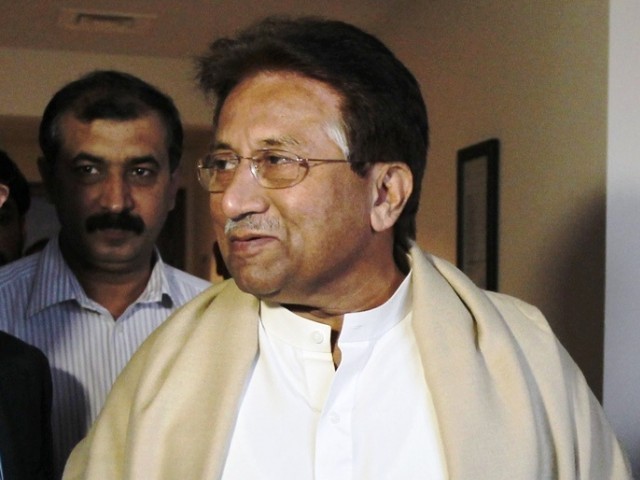 A day before former military ruler Pervez Musharraf was supposed to be indicted by the special court in his treason trial, the interior ministry, which happens to be his prosecutor, warned that there is a serious threat to his life from the Tehreek-e-Taliban Pakistan (TTP) and al Qaeda. Predictably, the warning led Musharraf to cancel his plan of appearing before the three-judge court on Tuesday (today).

Although Justice Faisal Arab, who leads the special court, has rejected all earlier pleas of the former military ruler, the interior ministry wrote to the relevant departments – Punjab home secretary, IGP Punjab, Islamabad chief commissioner, IGP Islamabad, Islamabad DIG Security and RPO Rawalpindi – saying that militants have thorough information about all possible routes from the Armed Forces Institute of Cardiology (AFIC) to the National Library.

With “Threat alert: 239” as its subject, the letter claimed that TTP and al Qaeda ‘fighters’ were stationed along different routes taken by Musharraf’s escort. “It seems that the terrorists have sympathisers in the security/cavalcade of Musharraf in order to assassinate him. The plan may materialise either using IEDs/VBIED or inside/outside the courts similar to the incident of [former Punjab governor] Salman Taseer,” stated the document.

Talking to The Express Tribune, one of Musharraf’s lawyers Ahmed Raza Kasuri said the complainant was not ready to bring the defendant to the court as it claimed that terrorists were waiting for him on different routes. “Life is more important that justice,” he said, adding that his client would not show up on Tuesday.

Earlier, Musharraf’s defence team had presented a threat letter in the special court, claiming that it was sent by the TTP. The letter asked the defence team to separate themselves from the case or else they would be killed.

On Monday, a lawyer of Musharraf’s legal team told The Express Tribune that this time the warning came from the prosecution. Therefore, the former General has cancelled his plans to go to the court. He said the defence team would also ask the court to grant Musharraf permission to leave the country for his treatment and to attend his ailing mother in Dubai.

However, an official said that this official letter was deliberately made public to give a message to the special court judges.

There was no harm if this information or letter was kept secret, he added.