Oil slick off Malaysia not from missing plane: official

Oil slick off Malaysia not from missing plane: official 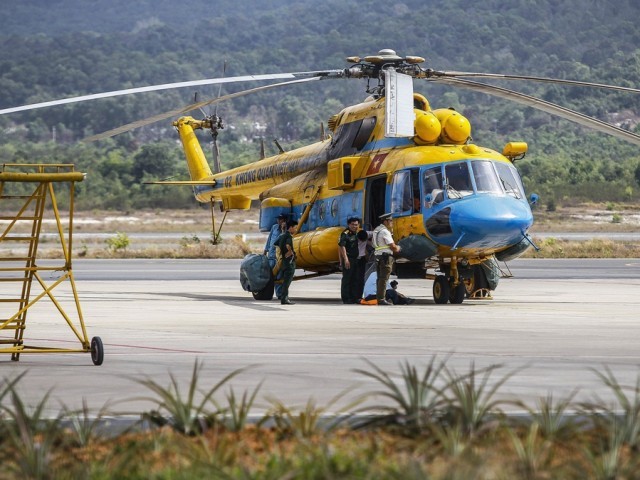 Vietnamese military personnel prepare a helicopter for a search and rescue mission for the missing Malaysia Airlines. PHOTO: AFP

KUALA LUMPUR/PHU QUOC ISLAND, VIETNAM: Samples taken from an oil slick off Malaysia are not from a missing jet based on results of a chemistry lab analysis, an official said Monday.

No confirmed evidence of the plane’s fate has yet been found despite a massive search, leaving authorities stumped and anguished family members demanding answers.

Malaysian authorities had collected oil samples from a slick about 185 kilometres (115 miles) north off the country’s east coast state of Kelantan and sent it for analysis in a laboratory in the capital Kuala Lumpur.

But the results came back negative for jet fuel.

“The oil is not used for aircraft,” Maritime Enforcement Agency spokeswoman Faridah Shuib told AFP, adding it was a type used by ships.

The slick, from which the samples were collected, was just south of the point where air traffic controllers lost contact with the plane, which carried 239 people.

The two-kilometre long slick was the largest of several in the area.

The disappearance of a Malaysian jetliner is an “unprecedented aviation mystery”, a senior official said on Monday, with a massive air and sea search now in its third day failing to find any confirmed trace of the plane or the 239 people aboard.

Vietnam scrambled helicopters to check reports of a floating “yellow object” that rescue teams suspected could be a life raft from the plane, but it was unclear whether the sighting would prove to be the first big breakthrough or merely the latest in a series of false alarms.

The head of Malaysia’s Civil Aviation Authority, Azharuddin Abdul Rahman, said a hijacking attempt could not be ruled out as investigators explore all theories for the loss of Malaysia Airlines flight MH370 en route to Beijing.

“Unfortunately we have not found anything that appears to be objects from the aircraft, let alone the aircraft,” he told a news conference before the Vietnamese helicopter scramble.

As dozens of ships and aircraft from seven countries scour the seas around Malaysia and south of Vietnam, questions mounted over possible security lapses and whether a bomb or hijacking attempt could have brought down the Boeing 777-200ER airliner.

A Vietnamese jet spotted what could be a life raft floating off Vietnam’s southern coast, but was unable to get close enough to determine what it was, Pham Quy Tieu, vice transport minister and deputy head of the country’s rescue committee, told Reuters, prompting the despatch of helicopters to investigate.

Interpol confirmed on Sunday at least two passengers used stolen passports and said it was checking whether others aboard had used false identity documents.

Flight MH370 disappeared from radar screens in the early hours of Saturday, about an hour into its flight from Kuala Lumpur, after climbing to a cruising altitude of 35,000 ft.

Underlining the lack of hard information about the plane’s fate, a US Navy P-3 aircraft capable of covering 1,500 sq miles every hour was sweeping the northern part of the Strait of Malacca, on the other side of the Malaysian peninsula from where the last contact with MH370 was made.

“Our aircraft are able to clearly detect small debris in the water, but so far it has all been trash or wood,” said US 7th Fleet spokesman Commander William Marks in an emailed statement.

Shares in Malaysia Airlines fell as much as 18 percent to a record low on Monday morning and were down 4 percent near the close.

No distress signal was sent from the lost plane, which experts said suggested a sudden catastrophic failure or explosion, but Malaysia’s air force chief said radar tracking showed it may have turned back from its scheduled route before it disappeared.

A senior source involved in preliminary investigations in Malaysia said the failure to quickly find any debris indicated the plane may have broken up mid-flight, which could disperse wreckage over a very wide area.

“The fact that we are unable to find any debris so far appears to indicate that the aircraft is likely to have disintegrated at around 35,000 feet,” said the source.

Asked about the possibility of an explosion, such as a bomb, the source said there was no evidence yet of foul play and that the aircraft could have broken up due to mechanical causes.

Still, the source said the closest parallels were the explosion on board an Air India jetliner in 1985 when it was over the Atlantic Ocean and the Lockerbie air disaster in 1988. Both planes were cruising at around 31,000 feet when bombs exploded on board.

The United States extensively reviewed imagery taken by American spy satellites for evidence of a mid-air explosion, but saw none, a US government source said. The source described US satellite coverage of the region as thorough.

Boeing declined to comment and referred to its brief earlier statement that said it was monitoring the situation.

The Boeing 777 has one of the best safety records of any commercial aircraft in service. Its only previous fatal crash came on July 6 last year when Asiana Airlines flight 214 struck a seawall on landing in San Francisco, killing three people.

About two-thirds of the 227 passengers and 12 crew now presumed to have died aboard the plane were Chinese. The airline said other nationalities included 38 Malaysians, seven Indonesians, six Australians, five Indians, four French and three Americans.

The passenger manifest issued by the airline included the names of two Europeans – Austrian Christian Kozel and Italian Luigi Maraldi – who were not on the plane. Their passports had been stolen in Thailand during the past two years.

An Interpol spokeswoman said a check of all documents used to board the plane had revealed more “suspect passports”, which were being investigated.

“Whilst it is too soon to speculate about any connection between these stolen passports and the missing plane, it is clearly of great concern that any passenger was able to board an international flight using a stolen passport listed in Interpol’s databases,” Interpol Secretary General Ronald Noble said.

Malaysia’s state news agency quoted Home Minister Ahmad Zahid Hamidi as saying the two passengers using the stolen European passports were of Asian appearance, and criticized the border officials who let them through.

“I am still perturbed. Can’t these immigration officials think? Italian and Austrian but with Asian faces,” he was quoted as saying late on Sunday.

A European diplomat in Kuala Lumpur cautioned that the Malaysian capital was an Asian hub for illegal migrants, many of whom used false documents and complex routes including via Beijing or West Africa to reach a final destination in Europe.

“You shouldn’t automatically think that the fact there were two people on the plane with false passports had anything to do with the disappearance of the plane,” the diplomat said.

“The more you know about the role of Kuala Lumpur in this chain, the more doubtful you are of the chances of a linkage.”