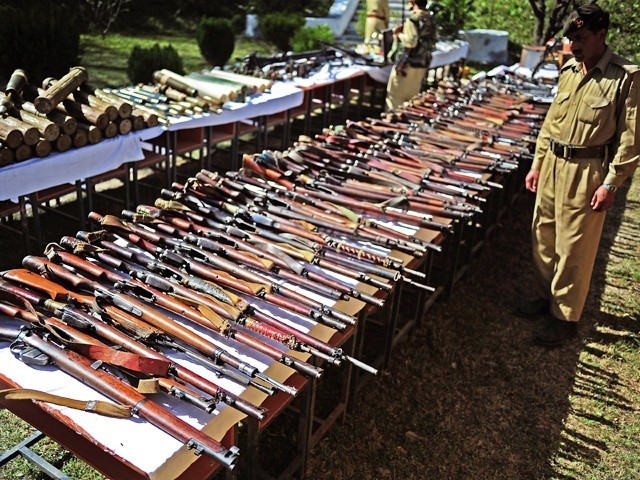 Rifles seized from insurgents in the Orakzai tribal agency displayed at Kalaya military base on October 26, 2010. PHOTO: AFP

KALAYA: Pakistan will consider mounting an anti-Taliban offensive in North Waziristan only when other areas are stabilised, a senior military officer said on Tuesday.

The army has repeatedly said it is too stretched fighting Taliban insurgents in other forbidding mountaineous regions, and that only it can determine if and when to strike.

Lt. General Asif Yasin Malik, the military commander for the northwest, said it would take at least six months to clear militants from Bajaur and Mohmand.

“What we have to do is stabilise the whole area. I have a very large area in my command,” he told reporters on a trip to Orakzai agency. “The issue is I need more resources.”

There are already six brigades in North Waziristan which carry out daily operations, he said.

In March, the military launched an offensive in Orakzai, which officials described as the nerve centre for Pakistan’s Taliban, which included training camps.

Officials said 654 militants were killed in what they described as a successful campaign that ended in June. Militants often dismiss official death tolls. Nearly 70 soldiers were killed.

Officials say militants are no longer capable of staging major operations and are resorting to sniper attacks and roadside bombings. Militants attacked a checkpost manned by paramilitary soldiers in Orakzai on Tuesday, killing one soldier, local officials said.

The army is getting villagers involved in efforts to keep the Taliban from returning by providing some of them with rifles.

Military officials say the operation broke the back of the Taliban and only 10 per cent of Orakzai still needs to be cleared.