Armed motorc­yclist­s open fire at Mushta­q Ahmed as he stops at a pan shop near his reside­nce in the Federa­l B Area.
By Faraz Khan / Rabia Ali
Published: March 4, 2014
Tweet Email 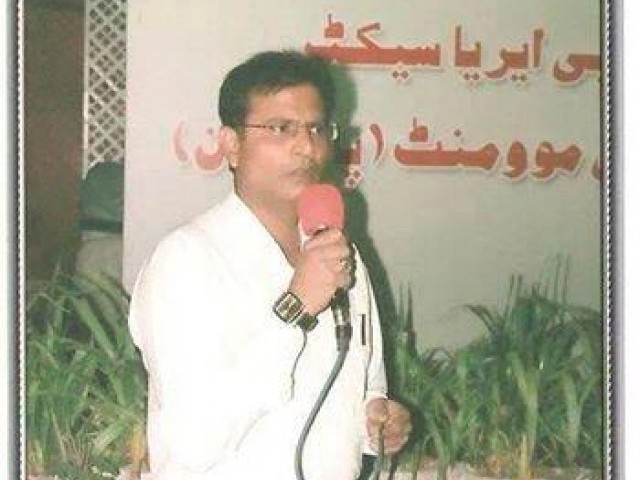 KARACHI: Senior Muttahida Qaumi Movement (MQM) office bearer and Incharge of the party’s Facts Finding Committee (FFC) Mushtaq Ahmed was gunned down Tuesday evening in the Federal B Area of Karachi. The MQM confirmed his death.

The 40-year-old was targeted by armed motorcyclists when he stopped at a shop near his residence. According to his friend Ahmed had gone to buy cigarettes after watching the first innings of the Pakistan-Bangladesh cricket match in the Asia Cup.

Assailants opened fire at him just after Ahmed after he reached the shop.

Ahmed was shot at least three times and died moments later. He received fatal bullet wounds to his head, neck and abdomen.

Police officials reached the site soon after the incident and started collecting evidence.

“At least four armed men on two motorcycles were behind the attack,” informed Samanabad DSP Azam Khan Durrani while speaking with The Express Tribune. “We have collected the empty shells of the pistols used in the killing.”

The body of the deceased was taken to the Abbasi Shaheed Hospital for autopsy where a score of MQM leaders, workers, supporters and the victim’s relatives had gathered.

Condemning the killing, MQM chief Altaf Hussain said that in the struggle against terrorism and extremism, his party’s workers were being targeted.

“It seems that a group of target killers have been given the task to kill senior workers of the MQM,” he said while speaking with the Rabita Committee. “What is shocking is how easily the criminals are getting away with their crimes.”

The MQM chief added that over the last 10 days at least 12 party workers had been killed. He demanded that the government and law enforcement agencies act to arrest the perpetrators at the earliest and give them exemplary punishment.

Senior MQM leader Khalid Maqbool Siddiqui stated that as many as five MQM workers had been killed in the past three days and that the authorities had failed to apprehend the culprits.

You will be missed Mushtaq Bhai May Allah Bless your soul & RIP Aameen Salute to U from All MQM Workers of Pakistan pic.twitter.com/fQXQMY2YpO

Change of scenery: 80 Sindh prisoners to be shifted to other provinces