More than six acres of poppy crop have been destro­yed.
By Our Correspondent
Published: March 2, 2014
Tweet Email 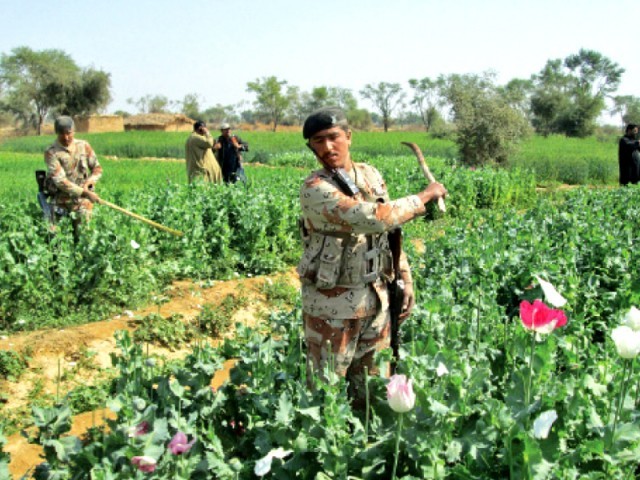 Law enforcers chop down the poppy crop that was being sown over multiple acres of land in district Qamber-Shahdadkot. However, they faced difficulty due to knee-high water accumulation. PHOTO: EXPRESS

Around six acres of standing crop of poppy was destroyed by law enforcers in a remote village — Acho Tar — between the mountains of Ghaibi Dero in district Qamber-Shahdadkot on Friday evening.

At Ghaibi Dero, poppy crop is sowed over many acres of land. A large team of the Rangers and police raided and cordoned off the area. They destroyed standing poppy over more than six acres but due to knee-high water accumulated in the fields, they could not destroy the rest of it.

The entire land officially belongs to the Sindh Forest Department but has come under the occupation of some influential persons of Chandio tribe. The law enforcers did not make any arrests as all the people working on the fields had managed to escape well ahead of the raid.

According to sources, the poppy crop is also being sowed in Asghar Sakhani Jatoi and Nabo Jatoi villages which are adjacent to Acho Tar village.

Colonel Malik Mukhtiar of Rangers confirmed that poppy is being sown in some villages including Acho Tar, Asghar Sakhani Jatoi and Nabo Jatoi and others. He said that the poppy is sown over approximately 45 acres between the sugarcane crop in the area. “The remaining poppy crops will be destroyed once standing water subsides,” he told The Express Tribune.