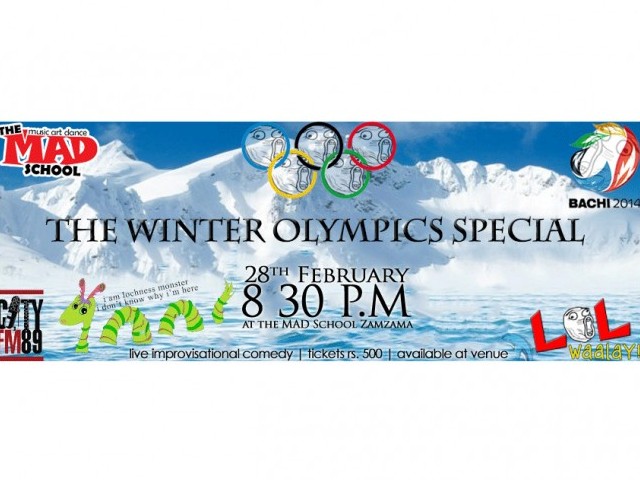 The MAD School may just be an acronym for Music, Art and Dance but the comedy performance there by Lol Waalay on Friday was nothing short of random madness.

“Everything we do here today is unscripted, it is all improvised,” explained comedian Akbar Chaudry before introducing the other four group members — Aadi Adeal Amjad, Syed Osama, Sannan Wastani and Zubair Tariq. “We will ask you to participate with us for a few things in order to make it more interesting.” And ‘interesting’ would prove to be an understatement.

The first skit was called ‘change’, where two of the performers had to start a dialogue. When the word ‘change’ was shouted out, they had to change what they were saying, often in midsentence, but had to continue with the same dialogue.

The second skit was ‘questions only’ where the comedians could only converse in questions and when they couldn’t, another was to take his place. “Ap ne shalwar kyun pehni hui hai? [Why are you wearing a shalwar?]” was one of the last questions, “Takay doobun nahi [So I don’t drown],” was the answer as the comedian pretended to learn to swim.

This was followed by ‘Whose Line’, where the comedians had to insert one-liners written by the audience into their dialogue while playing ‘winter kabaddi’. Thanks to the lurid one-liners written by the audience, the conversation went from kabaddi to sprouting flowers during pregnancy. When it took a sharp turn towards getting frisky at a funeral, Chaudry decided to call the skit to an end in order to keep it ‘family-friendly’.

Like all other skits so far, this one was just as hilarious and just as outlandish, with the highlight being one of the performer musing about how one can check the gender of a zombie after the audience member had claimed that it included both male and female zombies.

The comedians were then faced with the task of conveying news decided by the audience by acting it out. By picking up parts of different suggestions, the end result was that Waseem Akram had died skating inside Pizza Hut while on a first date. The attempts of the comedians to convey that ludicrous message to each other were just as amusing as the news itself.

‘World’s Worst’ was the next game, where Chaudry asked the audience to name an Olympic event. When someone suggested ‘Pole Vault’, Chaudry — highlighting the immaturity that made the performance so funny — started giggling.

By ensuring that each premise was as fantastically bizarre as the previous one — from kangaroos in heat to an Olympic torch with an unpaid electric bill — Lol Waalay made sure that their comedy was not only humorous but also unique. It was this randomness that kept the audience in uproar throughout the performance.

The only time the audience didn’t get a joke, another member came to his rescue. “Ye wala baad main samaj ayega [You will understand this later],” he shouted, helping out his colleague and demonstrating the quick-wit that endeared them to the crowd. With laughter usually at a premium in the city, the laughter that the Lol Waalay were giving away for Rs500 was an outright steal.