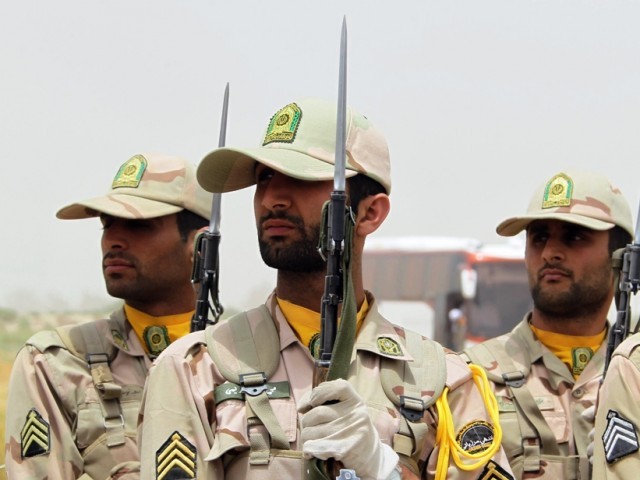 Five Iranian border guards had been kidnapped and allegedly taken to Pakistan by militants. PHOTO: AFP/FILE

Iran said on Monday it would send forces into Pakistan to free five border guards believed to have been kidnapped by militants if Islamabad did not take measures to secure their release.

According to Iranian media reports, the guards were seized on Feb 6 in the Iranian province of Sistan-Baluchistan by militants who allegedly took them across the border to Pakistan.

“If Pakistan doesn’t take the needed steps to fight against the terrorist groups, we will send our forces onto Pakistani soil. We will not wait for this country,” Iranian Interior Minister Abdolreza Rahmani-Fazli was quoted as telling the semi-official Mehr news agency.

An Iranian insurgent group calling itself Jaish al Adl had claimed responsibility for the kidnapping, according to a Twitter account purporting to belong to the group. The account’s authenticity could not be immediately verified.

The area where the kidnappings took place has a history of unrest, with the mainly Sunni population complaining of discrimination by Iranian authorities, a charge Iran denies. Iranian security forces have also fought drug traffickers in the region that borders Pakistan and Afghanistan.

The Iranian armed forces’ deputy chief of staff was quoted as telling the semi-official Fars news agency that Iran would “show tough confrontation in this case”.

“We will have no soft stand in this case and our neighbouring country … should account for its lack of action,” Major General Hossein Hassani Sa’di told reporters in Tehran on Monday, according to Fars English language website.

Sa’di said the guards were still alive, and underlined that “political and military measures are under way to set them free”, without elaborating.

In October, 14 Iranian border guards were killed and three others captured in the same area in an attack that ISNA said was carried out by Jaish al-Adl.

Jundollah militant group, which Iran says is linked to al Qaeda, has claimed a number of attacks and kidnappings since 2003, including a 2010 suicide bombing that killed dozens of people at a mosque.