Arif Khan had gone missin­g from SITE area a couple of days ago as he was on his way to work.
By Our Correspondent
Published: February 16, 2014
Tweet Email 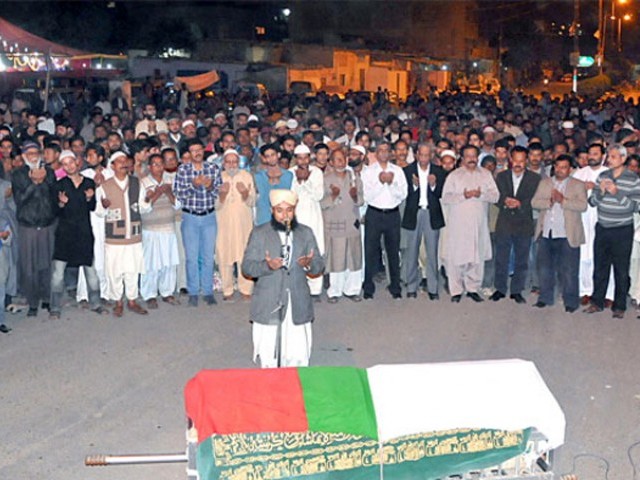 Workers and supporters of MQM gather to offer the funeral prayers for Arif Khan, 35, who was found dead early on Saturday. PHOTO: MQM.ORG

An activist associated with the Muttahida Qaumi Movement (MQM) was found dead on the outskirts of the city on Saturday.

Arif Khan, 35, son of Hanif Khan, was associated with Unit-131 of the MQM and went missing a couple of days ago from SITE area as he was on his way to work.His family also staged a protest on February 13 outside the Karachi Press Club, where the family demanded his return by accusing the Rangers of his abduction.

The deceased was a resident of Orangi Town. Manghopir SHO Fateh Mohammad Shaikh said that he had no information about his apprehension by the law enforcers, adding that the deceased was killed after being kidnapped.

Earlier on February 3, MQM Korangi Unit-75 worker Muhammad Salman was taken into custody by men dressed in police uniform from Korangi Crossing. His body was later found in Landhi the next day.

In December last year, bulled-riddled bodies of three MQM men were found from Super Highway. Another MQM man, Muhammad Adil aka Adeel, died due to alleged torture by law enforcers on February 11.

SHC petition: Govt to explain why vaccinators remain on contract