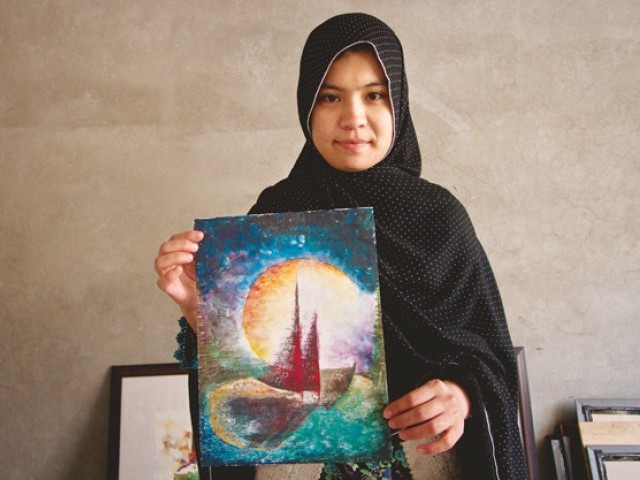 A student at the Sketch Club displays her painting of a boat that depicts the horrors that confront Hazara asylum seekers escaping to Australia . PHOTOS: DANIAL SHAH

Red may run through the lives of Hazaras in Quetta but their children still manage to paint a positive picture. At the Sketch Club in Mariabad, that boasts the oldest Hazara settlement in the eastern half of the city since the late 18th century, parents enroll their children to nurture their artistic talent.

It’s not hard to spot the club tucked away in the middle of a row of stores and houses in the neighbourhood. The words ‘Sketch Club’ are painted in an oblique font on the signboard at the entrance, cemented in place over a stand-out white steel gate. A flight of stairs lead up to an open terrace where children sit in broad daylight, with their sketchbooks and shading pencils in tow. Inspired by an astounding view of the Mariabad valley, where houses are built in succession one above the other, they begin to sketch the object placed before them, taking instructions from their maestro on how to add highlights and texture to their drawing.

“I was teaching art at a school when I felt the need to [pass on] my skill to my community, hence the concept of ‘Sketch Club’ came into being,” says the 54-year-old drawing instructor, Fazil Mousavi. After completing his degree in Fine Arts at the University of Balochistan, in 1988, at a time where only one other known Hazara student graduated with him, he started work as a freelance artist, participating and winning prizes at nationwide exhibitions till 2002 and holding a solo exhibit at the Museum Willem van Haren, Holland, in 2007. But Mousavi’s vision was fulfilled with having his very own sketch club in Quetta, where he now offers psychological and emotional catharsis through art to Hazara boys and girls.

In 2001, when Mousavi initially laid the foundation for the club, he started off by voluntarily teaching four children of a friend who owned a rickshaw-painting workshop. “I groomed those kids and realised that I [had] the potential to train the younger generation to express [themselves] through art,” he says, having mentally sketched out a career path that now involved more teaching and less practicing.

Although his vision was clear, his path was paved with many obstacles. Due to a lack of funds, Mousavi had to briefly hold back his plans until late 2008 when a friend offered him a temporary location to operate from. The Sketch Club was however formally launched in mid-2009 when Mousavi rented his own place, a terrace with a small studio room. The journey from here on was less bumpy with the students exhibiting their work for the first time that year at the short-lived Urooj Art Gallery in the city, opened by a Hazara who had returned from Australia, and then on, yearly at the General Mohammad Musa Inter Boys College, Quetta.

Mousavi’s resolute determination and hard work were the primary factors behind the club’s astounding success. He dedicated two hours a day, five days a week, to mentoring students, with theory playing as vital a role as practical learning. One class each week is devoted to conceptual learning only to encompass a more holistic approach to arts. “My theory is not formal; it is whatever I’ve learnt through my experiences and self-study. I teach students to build their own perspective keeping in mind [the] historical and contemporary arts of the world, while [also] considering arts of this region,” he explains. He feels that creativity is stunted in a country where schools limit their children to drawing houses and trees.

Classrooms often display children imitating a Western home on paper, replete with slanting roofs and a chimney, instead of encouraging young minds to take inspiration from their culture and surroundings. “No one teaches creativity. In this part of the world, a common man thinks art is merely a painting of a [movie] celebrity reproduced by a painter — nothing beyond that.”

From drawing and colouring objects with colour pencils, to graduating to painting landscapes with watercolour or oil on canvas, the students have unrestrained freedom of medium. Peace and intercultural harmony is at the heart of many students’ work. “The dove [symbolises] peace, which is surrounded by the Baloch, the Punjabi, the Sindhi, the Pathans, the Hazaras and the Kashmiris, all unit[ed]. The colours represent the diversity [of the people],” says a grade nine student who has been polishing her skills for a year and half. Besieged by anti-Shia violence, young Hazaras imagine racial solidarity and paint common ground.

With no specified age criteria, Mousavi prefers students to have cleared at least grade six before they can pursue art at the club, and can continue till they are in their mid-twenties. “I have a whole world inside of me that I want to express,” exclaims a student. “Through paintings, I can [convey] whatever I feel and imagine.” While proudly exhibiting paintings, the student points out to the one depicting motherhood, claiming it is a favourite. “I tried to paint the love of a mother and child and their strong bond.” Excited to display more work, the student even rushes home to fetch another piece, featuring a boat in the middle of an ocean, glistening in the moonlight. “This is what I can imagine of the horrors of innocent asylum seekers [Hazaras] escaping to Australia.”

Despite the surge in killings of the Hazaras in Quetta, Mousavi is pleasantly surprised and pleased with the increase in the number of students. “Art is [a] sign of a tolerant community and our youngsters are interested in it,” he says. Currently around 30 students are enrolled and they pay a modest monthly fee of Rs1,000. And for those who cannot afford to pay at all, Mousavi offers his services for free, hoping to get more and more children involved in art. Initially he also bought all the art supplies for the students himself, which included the canvas, oil paints, colour pencils, brushes, pastels, charcoal, paper and watercolour, but later asked them to purchase their own supplies which round off to Rs1,000 per month. “I don’t offer any certifications or diplomas, that way students become greedy to earn a piece of paper instead of learning a skill. It [the club] is open for all with no time duration,” he says, clearly stating his vision and the club’s mission. “I am getting old, and there should be no reason [to hold me back from] transferring my skills and knowledge [of] art to the younger generation.”

With a firm belief in the healing power of art, Mousavi intends to channel the energies of the emotionally charged children into constructive works of art. “To [communicate] our internal pain and joy, we create art as a medium of self expression,” he says. While emphasising the importance of racial equality he adds, “We want people to come and join us in [a display of] solidarity and unity, and to feel what we feel. It shows that despite the sectarian violence, we are still united for peace.”

Never losing sight of the bigger picture, Mousavi’s only aim is to attract social support for his non-violent movement that seeks a peaceful coexistence for his community. But with limited space and finances for exhibitions, his outreach is also relatively stunted. “Unfortunately, art has become part of a particular class,” he claims, adding how commercialised the industry has become. “But I believe it is for every human being… that is why we keep low prices [for] our paintings at exhibitions.”

In 2012, Sketch Club held its first international exhibition in Melbourne and Sydney, Australia, where around 15 paintings were sold, and in November 2013, in Los Angeles, America, where 40 paintings were exhibited. The price for each painting at international exhibitions ranges between $200 to $300, depending on the size of the canvas, and Rs5,000 to Rs8,000 for ones sold locally.

With the message of the paintings travelling far and wide, the Sketch Club has garnered great support from art enthusiasts and activists alike. And more importantly, the students have gone on to build thriving careers in art. Mousavi can recall the names of around 12 of his students who are now pursuing a graduate-level art degree at numerous art colleges in the country. One of his students has successfully completed his Fine Arts degree in Miniature from the National College of Arts in Lahore and is now an international renowned painter in Australia.

Along with his students, Mousavi’s own two sons have done him proud by excelling in the field of arts. They both graduated from the National College of Arts, with Syed Sajjad going on to teach Fine Arts at the University of Balochistan and Syed Muhammad Hussain procuring a job as a graphic designer at a private firm in Lahore. His daughter Tayyaba is currently studying biotechnology at the Balochistan University of Information Technology, and the youngest, Shikufa, is completing her O’ Levels.

A regular class at the Sketch Club where children gather around objects to polish their drawing skills.  PHOTOS: DANIAL SHAH

As Mousavi proceeds to bring out the creative side of Hazaras, the tide of change slowly washes over Mariabad. Students who have been practicing sketching the clay pots and bottles placed before them wrap up their lesson and pack up to head back home. Stashed away with their canvases are their budding hopes that Mousavi wants to mould into reality one day.

Danial Shah is travel writer and photographer who is always on the lookout for positive stories. He tweets @DanialShah_