TTP spokes­person Shahid­ullah Shahid says the group was not involv­ed in the attack.
By Faraz Khan
Published: February 10, 2014
Tweet Email 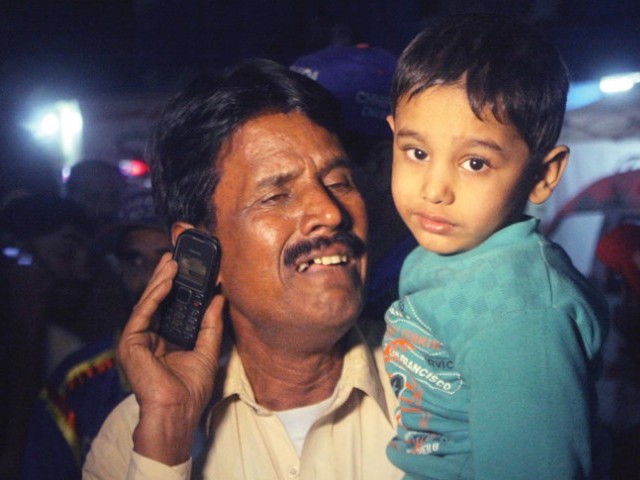 A relative of a firing victim talking on phone. PHOTO: PPI

KARACHI: At least eight people were killed and over a dozen wounded on Sunday night when gunmen riding on motorcycles resorted to indiscriminate firing at a shrine on the outskirts of Karachi.

At least 40 people, belonging to various ethnicities, were present at the Aastana of Baba Pir Mehrban Shah when the attack happened. The Aastana, located in Sector 12-D in the Saeedabad area of Baldia Town, is maintained by the sons of a retired DSP, Tikka Khan. One of his sons, aged 25, was also injured in the attack.

According to witnesses, six to eight gunmen on motorcycles came to the Aastana and opened fire. Some also claimed that the assailants lobbed some explosive material before firing. The attackers completed their operation within two or three minutes and fled the scene. The casualties were moved to the Civil Hospital. “We received eight bodies and 15 injured people,” medico-legal officer Dr Aftab Channar told The Express Tribune. “The death toll may increase as some of the injured are in very critical condition,” he said. “Our findings suggest all had gunshot wounds.”

The deceased included Muhammad Moin, his five-year-old daughter, Zainab, Dilbar Gul Khan, Muhammad Essa and Nazeer Younus. Four others have yet to be identified.

Police reached the site and collected forensic evidence, including dozens of empty shells of 9mm pistols.

Tehreek-e-Taliban Pakistan spokesperson Shahidullah Shahid says the group was not involved in the attack.

This is the second such attack to have occurred within a few weeks. On January 7, six men were found with their throats slit at a shrine on the outskirts of Karachi, accompanied by a note threatening a similar fate for others visiting the shrine. The bodies were found in a mudhouse adjacent to the Ayub Shah shrine in Gulshan-e-Maymar.

Separately, a prayer leader, 38 year-old Nadeem Qadri, was shot dead in a targeted killing in Sector 11, Orangi Town. Police said Qadri was returning from the evening prayer at a mosque in Raees Amrohi Colony when two armed men on a motorbike shot him.

Crisis in Balochistan: PML-N provincial legislators to map out plan in Karachi today