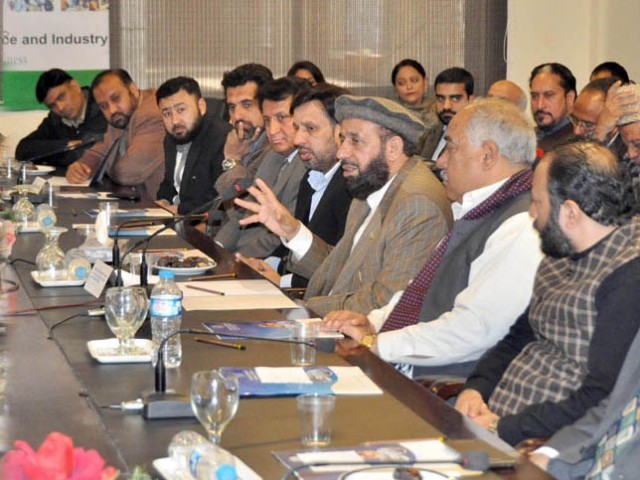 Sardar Mohammad Yousaf chairing a meeting of the Hajj and Umrah Committee at the Rawalpindi Chamber of Commerce and Industry on February 1, 2104. PHOTO: PID

RAWALPINDI: Federal Minister for Religious Affairs Sardar Muhammad Yusaf on Saturday said that a new Hajj policy is in the making with the special emphasis to provide better facilities to indenting pilgrims, and an agenda to cut down rising air fares for pilgrims.

Addressing a function at Rawalpindi Chamber of Commerce and Industry (RCCI), the minister stated that the government attaches top priority to improve conditions for Hujjaj in Pakistan and Saudi Arabia.

He said a high-level delegation is being sent to Saudi Arabia to negotiate various matters pertaining to transport and residential accommodation for the Hajis.

He assured that all workable suggestions of the RCCI for the improvement of facilities for Hujjaj and those who intended to perform Umrah, would be incorporated in the new Hajj policy.

The quotas for private tour operators, which were slashed last year, will also be restored.

Yousaf said the ascending value of the dollar had inflated the cost of Hajj , but this year the Ministry would take the matter up with PIA to lower fares to affordable prices.

India for instance, he pointed out, had controlled Hajj by arresting the dollar’s ascent and offering high rates of subsidy to the Hujjaj.

The upcoming Hajj will also utilise the Electronic Monitoring system to alleviate grievances of Hujjaj.

Earlier, Acting President RCCI Malik Shahid Salim and Chairman of RCCI Standing Committee on Hajj and Ummrah Bilal Maqbool gave a detailed briefing to the Minister and apprised the matters confronted to the private Hajj and Umrah tours operators.

A large number of members of the RCCI attended the function.