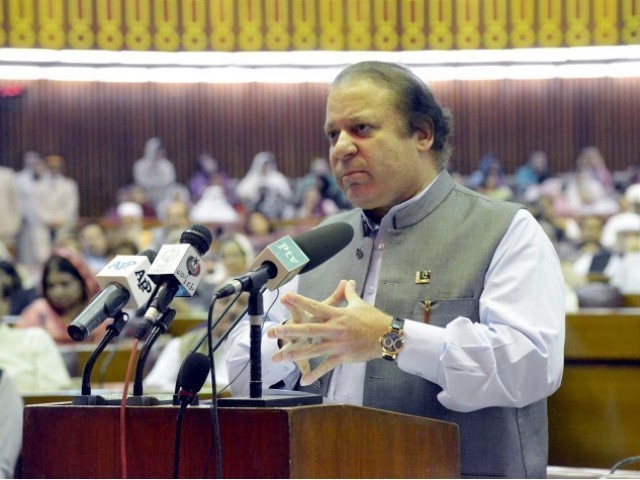 ISLAMABAD: Prime Minister Nawaz Sharif announced that he has made a four-member committee for negotiations with the Tehreek-e-Taliban Pakistan (TTP). He was addressing the National Assembly on Wednesday.

The premier added that terrorism and peace talks cannot happen at the same time, further stating that instances of violence will not be tolerated any more.

Nawaz also said that Islam is a religion of peace and it does not condone terrorism.

He expressed sorrow over the lives lost in terror attacks, stating that he can only empathise with the victims’ families.

With a thinly-veiled reference to General (retd) Pervez Musharraf, the prime minister also remarked that one dictator has turned Pakistan into a centre of terrorism.

Special Assistant to the Prime Minister Irfan Siddiqui said the first mandate of the Peace Committee would be to establish contacts with Taliban for dialogue.

Addressing a news conference in Islamabad on Wednesday evening‚ he said the contact numbers of the committee would be publicised and the other side would be encouraged to contact its members too.

He said the committee would determine the next course of action after contacts had been established and a response received. He said it would be appreciable if the other side also nominated a committee or some individual for contact and dialogue.

The special assistant said the government understood that Taliban too, have appreciated nomination of the members.

Siddiqui said in response to a question that the committee is empowered to make necessary decisions. He said the talks did not have a time frame as yet but would always be a priority.

“I welcome peace talks and request the prime minister that this be an open dialogue,” said Pakistan Tehreek-e-Insaf chairperson Imran Khan.

He assured the PM and the speaker of the assembly Ayaz Sadiq that the party would fully support the peace talks.

He also asked if there will be a ceasefire during the dialogue.

Chief Minister Pervez Khattak also welcomed formation of the committee, conceding that all members were well-respected and must be given the full mandate to ensure the talks ended in concrete results.

Khattak said that dialogue and jirga were the only solution to resolve complicated issues.

Earlier on January 23, the government had decided in principle to launch a military operation against anti-state groups. It had been announced that and the prime minister would make a statement about an operation in the next session of parliament. The decision was taken during a high-level meeting, chaired by Prime Minister Nawaz Sharif, on internal security following a wave of deadly bombings in the country.

At the meeting, the government was informed by the country’s military leadership that “a full-fledged operation in the tribal areas” is required to curb sectarian violence and terrorism, officials had told The Express Tribune.

Later, The Taliban, while reiterating their offer for peace talks, had asked the government to come up with a “clear stance if it is sincere in pursuing dialogue”.