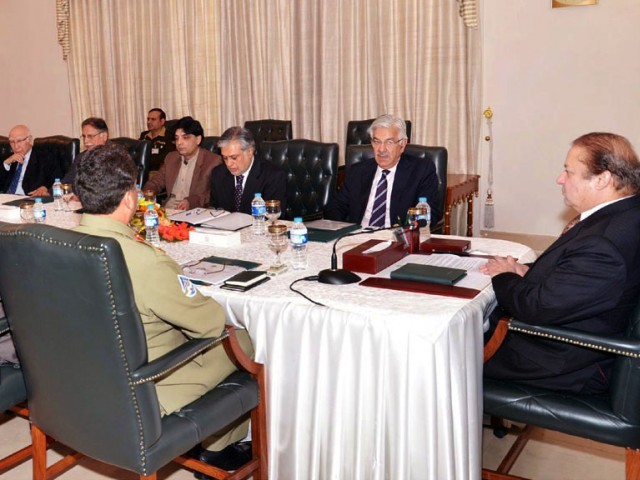 The government has decided in principle to launch a military operation against anti-state groups and the prime minister will announce the operation in the next session of parliament, Express News reported on Thursday.

The decision was taken during a high-level meeting, chaired by Prime Minister Nawaz Sharif, on internal security following a wave of deadly bombings in the country.

Separately, President Mamnoon Hussain has summoned the National Assembly’s eighth session on January 27. According to officials, the government is likely to promulgate the Protection of Pakistan (Amendment) Ordinance 2014 and debate options for dealing with the threat of militancy.

At the meeting, the government was informed by the country’s military leadership that “a full-fledged operation in the tribal areas” is required to curb sectarian violence and terrorism, officials told The Express Tribune.

The premier was told that the army was fully prepared for any tactical strike or even a full-fledged operation.

Chief of Army Staff General Raheel Sharif presented a preliminary report to the prime minister, detailing the sequence of terrorist incidents and the existing security situation.

Both the Inter-Services Intelligence (ISI) director-general, Lieutenant General Zaheerul Islam, and the Director-General of Military Operations (DGMO) gave briefings on the security situation along the country’s borders.

Responding to the briefings, PM Nawaz said that although the spectre of violence and terror had loomed large over the country, the deadliest waves of attacks have struck Khyber-Pakhtunkhwa (K-P) and Balochistan, which need to be addressed on a priority basis.

Several sets of options were placed on the table — from surgical strikes to a large-scale military operation — and examined by senior officials. The consensual view was that intelligence agencies needed to swap information regularly and coordinate with each other as much as possible.

The meeting decided to draw up a mechanism to expand intelligence sharing between the federal and provincial units.

With regards to the targeted operation in Balochistan, as demanded by the Hazara community, General Raheel assured the prime minister of the army’s full support to the Frontier Corps (FC) and the law-enforcement agencies in restoring peace in the province.

Earlier, PM Nawaz ordered the completion of draft laws against terrorism, keeping in view the sensitivity of the security situation. The interior minister was also directed to visit Quetta and address the concerns of the Hazara community.  Chaudhry Nisar arrived in Quetta, assured the protesters of a targeted operation against the culprits and managed to end the sit-in.

Sami ‘not given any mission’

In a rebuff to the Jamiat Ulema-e-Islam-Sami (JUI-S), the government issued a statement regarding the letter written by Maulana Samiul Haq.

The government’s spokesman said the JUI-S chief had not been given any “specific mission” regarding measures to address issue of terrorism. Instead, he was asked in general to use his good offices and cooperation in this regard, said the statement.

Maulana Sami, in a press statement issued on Wednesday, walked away from the peace process, citing the lack of seriousness on the government’s side.

However, the government denied the claim and said that after his meeting with the prime minister, the JUI-S chief was informed of the people appointed with which he would maintain contact. “Even three weeks after the meeting, he did not inform (the government) about any progress,” the spokesman said.