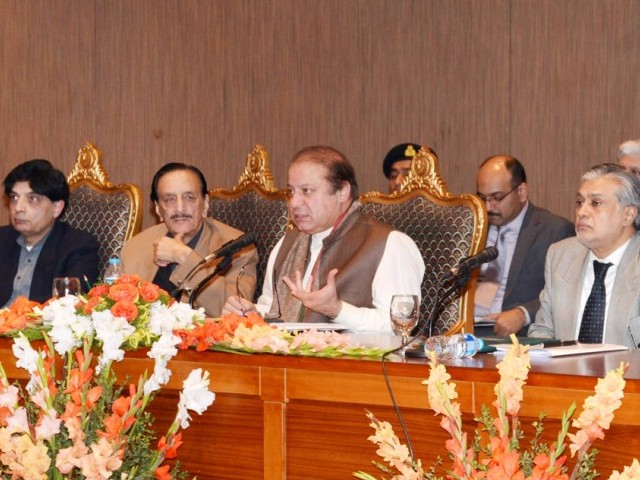 The Pakistan Muslim League-Nawaz (PML-N) has failed to take a decision on how to deal with the Tehreek-e-Taliban Pakistan (TTP) even though a sizeable majority in the ruling party is in favour of a military operation.

Prime Minister Nawaz Sharif convened a meeting of PML-N’s parliamentary party on Monday just before the National Assembly session to get feedback from his party’s lawmakers. However, the meeting could not decide between a decisive military operation against the Taliban or initiating another effort to engage them in talks.

“A majority of our lawmakers favoured going for a military operation. But some of them also said the doors to dialogue should remain open. No formal decision has been taken yet,” Mohsin Ranjha, the parliamentary secretary for the information ministry, told reporters after the meeting.

“Without eliminating extremism, we cannot place Pakistan on the path of development. We will take every step to restore peace in the country. Officers and soldiers of our armed forces are laying down their lives and their blood will not go in vain,” an official handout quoted the prime minister as saying.

The government’s vacillation incensed the opposition as did the prime minister’s absence from the National Assembly, where he was expected to give a policy statement in the house.

In his absence, Interior Minister Chaudhry Nisar Ali Khan tried to cajole the enraged opposition with a lengthy speech. However, his declamation could not pacify them.

The opposition parties unanimously demanded a timely decision in the wake of the recent attacks on the security forces and the deteriorating law and order situation.

Addressing their concerns, Nisar said the premier did not attend Monday’s session deliberately because more deliberation was needed before announcing a policy statement. He also came down hard on the main opposition party, the Pakistan Peoples Party (PPP), for ‘unduly’ criticising the government on not taking any decision so far. “Why did you not start a military operation or sit for talks with the TTP during your five-year term,” Nisar said addressing Opposition Leader Syed Khursheed Shah.

The interior minister informed the lawmakers that the government has once again started consulting all stakeholders on both options – negotiation or military operation. “Both choices are tough because the rival is not a visible force or party. We will take briefings from all intelligence agencies of the country, we have already met the military leadership and we will discuss the options with the country’s political leadership too,” he added.

Earlier, Khursheed Shah said the parliamentarians were looking forward to the prime minister’s policy statement, as that would have provided the nation some hope, but the premier preferred to stay away.

“The prime minister should have attended this session, which was convened after a long delay. These are defining moments [of history] and all eyes are on the leadership and the prime minister who have to play their part,” Shah said. “We want to support him on this national issue,” he added.

Pakistan Tehreek-e-Insaf Chairman Imran Khan also criticised the premier, saying that the country was facing a leadership crisis. The prime minister paid several visits to other countries but it seemed like internal peace was not his priority, he said.

Imran reiterated that all political parties must be taken into confidence on what the next steps of the government would be. “Let me make one thing clear: we are not pro-Taliban. We want the Quaid-e-Azam’s Pakistan because we are followers of Allama Iqbal. We support negotiation process with the Taliban for the same reasons,” he explained.

Moreover, that was the consensus after all four all parties’ conferences anyway, the PTI chief added. “In case we wage war, have we calculated the damage and the retaliation, which was why we did not conduct an operation in Waziristan earlier,” he asked, quoting former spy chief Shuja Pasha’s briefing to the APC.

Meanwhile, other parliamentarians, including MQM’s Dr Farooq Sattar and AML’s Sheikh Rasheed, also pressed the government to take a policy decision – and fast.