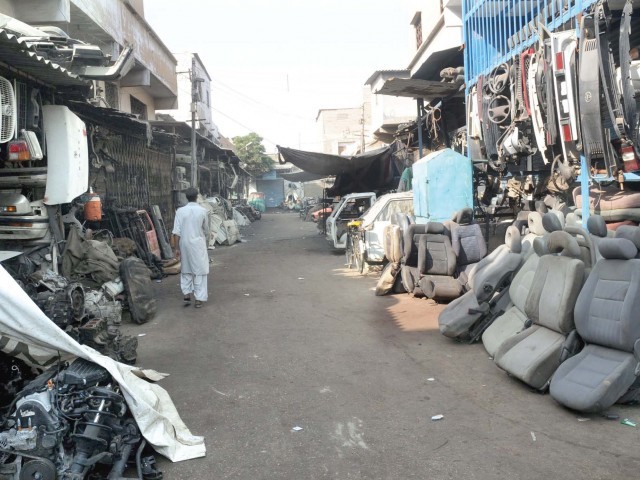 The Shershah market remained closed for two days after the horrific attack on Tuesday. PHOTO: EXPRESS

KARACHI: After relying solely on conjecture and vague theories of ethno-political warring, the Shershah scrap market incident has provided pivotal insight into the phenomenon of target killings, which have claimed a staggering 1,043 lives from January to September this year. This number does not include the 80-odd deaths in October.

Background interviews with police and market officials by The Express Tribune suggest that the incident, in which a dozen gunmen launched a brazen attack that claimed the lives of 13 innocent men, took place after failed ‘negotiations’  between an extortion group and the Shershah market association.

The negotiations, which took place between a gang that reigns supreme in neighbouring Lyari and the market association’s president, were over the imposition of new extortion rates — which were rejected by the association that was reportedly already frustrated after paying enough to other quarters ruling over neighbouring Baldia.

The meeting ended, somewhat expectedly, with the gang issuing dire threats to the market association’s president. On Tuesday evening, a brazen attack was launched in the market, in which 13 people were killed.

Contrary to some reports, the killings were up close and specific — and not random. More tellingly, of the 13 victims, five were from one family — the family of the secretary-general of the same Shershah market association that had rejected demands for a new extortion regime in one of the biggest scrap markets in the region, with about 8,000 shops.

The secretary-general lost his brother-in-law, two nephews and two grandsons in what was initially called ‘random firing’ by a dozen or so attackers. The FIR lodged on Thursday nominates Lyari gang members led by Baba Ladla, who run their own crippling extortion racket in Lyari, further giving credence to this report.

All of the dead belonged to the Urdu-speaking Karachi-based community, contrary to initial reports that the ethnicities of the deceased were Pakhtun or Baloch.

However, more so than the ethnicity, the interviews suggested that the extortion factor is a defining one for the target killings.

Police officials say that the ethno-political colour given to the killing sprees can be misleading. “Most, if not all, of these hits are based on gang warfare. They revolve around extortion, which is a huge money-making source,” said one high-ranking police official.

The situation eventually boils over to an ethno-political feud, but the causal factors are very much monetary — a battle over extortion to be more precise. Elucidating this point, another officer likened the extortion regimes to “stock markets”. When there is more violence — and major incidents usually take place in and around major markets of the city — it automatically means that the extortion rate goes up manifold in the form of protection money in tense times.

This is more potent when traders are targeted in the garb of target killings, which is often the case when shops and commercial set-ups, such as tea stalls, are attacked. Hardly any of those men killed have proper political affiliations – so it cannot be described as political violence.

In times of violence, where traders fear being targeted on the basis of their identity, the daily money can double, or even more — push the money total past Rs50 million a month.

And that’s from a single market.

There are dozens of such markets in Karachi, which means the stakes are huge, and to the extent to which turf wars can go, even higher.

Moreover, another senior police official argues that it is often in the interests of some smaller pressure groups, or mafias, to jump into, or even set off, ‘target killings.’ They can drive home their point, and then have the blame pinned on groups that are more easily associated with such incidents.

Many murders that are listed as target killings may not be a part of the larger battle that is perceived to be going on. But since the overall scenario provides perfect cover, the crimes go without punishment after political settlements are reached between the major players on the official stage.

In this vein, almost all police officials complain about political interference when it comes to dealing with the target-killing phenomenon. “There are a total of about 400 people that are involved in this,” said one official, adding that it would not even need a large-scale and long-term crackdown, but a swift and hard hit by law-enforcers. But, they simply do not have the go-ahead.