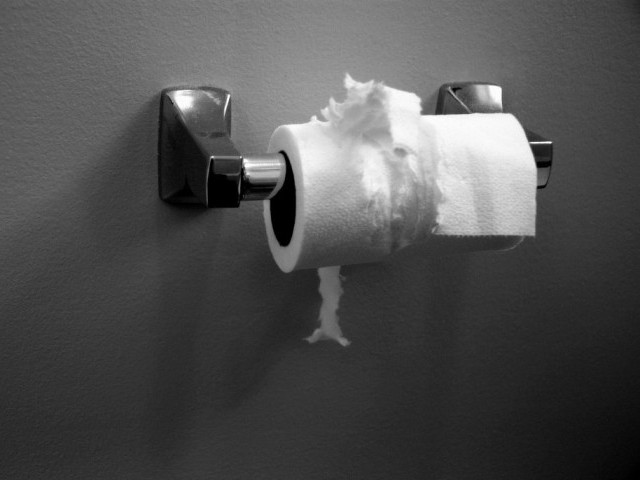 The first thing you notice when you land in a foreign country is its airport. While it might not offer state-of-the-art facilities, visitors are justified in expecting that at least the toilets would be functional.  Unfortunately, at the Benazir Bhutto International Airport, which services the twin cities, visitors are taken aback by the condition of the toilets.

The lack of facilities is tarnishing the country’s image as dirty toilets are creating problems for passengers and their relatives.

Even though the Civil Aviation Authority (CAA), which is supposed to manage the airport has sufficient budget to provide facilities to the public, it seems to have little interest in improving its condition.

There are six toilets for the public and airport staff but all of them were overflowing with wet toilet paper spread across the floors. The toilets in the parking lot of the airport are especially messy.

“Airports are the face of a country, but unfortunately the CAA is projecting a dirty picture across the globe. Often foreigners who wish to use the facility, step back after seeing the toilets’ condition,” said a security officer, who wished not to be named. “Due to the disgusting mess inside, you cannot keep your clothes from getting dirty.”

Rahim Khan, who had come from Rawalakot to receive his son, coming from London, said it was unfortunate that the CAA has failed to provide clean toilets to passengers and their relatives. “If CAA cannot maintain public toilets, how can it be expected to provide better facilities to passengers,” he questioned.

Women were particularly vocal in criticising the CAA for the dirty condition of toilets. Interestingly, the CAA is charging Rs20 as entry fee from everyone entering the airport, excluding passengers. The fee levied on relatives and friends accompanying passengers is collected through a private company.

A couple of months back, Justice Ijaz Ahmed of the Lahore High Court Rawalpindi Bench had declared this practice illegal, but CAA had the order of the single bench suspended on appeal.

“Every day we deposit Rs100,000 with the CAA after collecting entry fee from visitors,” said Abbas Ali, supervisor of the private company responsible for collecting the entry fee.

A visitor, Kamran Mehfooz said it was unjust that the CAA was collecting millions of rupees from the public but had failed to provide basic facilities to visitors. “CAA should spend at least a few thousand to clean up the mess which is tarnishing the country’s image, he added.

CAA Spokesman Mubarik Shah blamed drivers of private companies and the huge number of visitors for the filthy public toilets, perhaps neglecting the fact that the airport welcomes a low volume of air traffic compared to those at Karachi and Lahore. He, however, claimed that in the next few days, the CAA would resolve the issue.