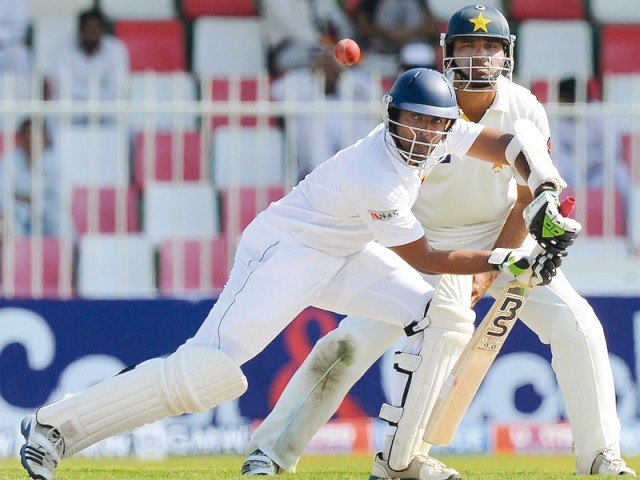 Dilruwan Perera missed a century on his debut while skipper Angelo Mathews fell for 91 as Sri Lanka frustrated Pakistan on the second day of the third and final Test in Sharjah on Friday.

Perera (95) and Mathews made life difficult for the hosts through their 112-run seventh wicket stand before Sri Lanka declared their first innings at 428 for nine, leaving Pakistan to score 19 for nought in a tricky six overs before the close of the second day’s play.

Openers Ahmed Shehzad (five) and Khurram Manzoor (14) survived an anxious time as Pakistan go in search of a big lead to square the series after losing the second Test by nine wickets in Dubai.

Sri Lanka, leading the series 1-0 after the first Test ended in a draw in Abu Dhabi, are aiming to seal the series.

The day once again exposed the flat Sharjah stadium pitch as Mathews put 73 for the sixth wicket with Prasanna Jayawardene (35) and then batted solidly with Perera, leaving Pakistani bowlers frustrated as they failed in their search for quick wickets.

Perera looked more solid during his 305-minute batting as he drove and pulled with perfection before hooking pace man Mohammad Talha into the hands of deep fine-leg.

He added an invaluable 72 for the ninth wicket with Shaminda Eranga (25 not out).

Mathews once again anchored the Sri Lankan batting, defying Pakistan’s bowling for six hours before he fell to a miscued drive off pace man Junaid Khan who finished with figures of 3-81. Talha finished with 3-99 while spinner Saeed Ajmal had a return of 2-120.

Resuming at 220 for five, Sri Lanka’s batsmen batted solidly in both the sessions.

Pakistan did waste their second referral when Mathews, on 34, was given not out by English umpire Richard Kettleborough, and TV replays showed the ball missing the stumps. In the end it was Talha who had Prasanna, the only wicket in the morning session.