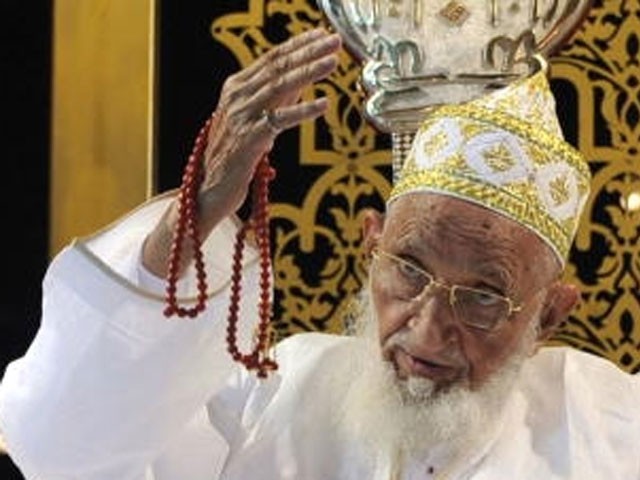 MUMBAI: The spiritual leader of Dawoodi Bohra community Dr Syedna Mohammed Burhanuddin passed away on Friday after a cardiac arrest in Mumbai. He was 102.

Born in Surat, Syedna Burhanuddin was the leader of the Dawoodi Bohra community after succeeding his father Syedna Taher Saifuddin in 1965, Times of India reported.

Under his leadership, the community has achieved remarkable social, economic and educational success across the world.

Known as ambassador of peace and goodwill, he was highly respected by world leaders and governments for his endeavours in promoting international brotherhood and harmony,” a community spokesperson said.

He was honoured with highest civilian titles like the Star of Jordan and Order of the Nile by the respective governments of Jordan and Egypt. Syedna was conferred Honourary Doctorates for his efforts in social and educational development by renowned institutes like Al-Azhar University, Cairo, Aligarh Muslim University and University of Karachi.

Syedi Aaliqadr Mufaddal Bhaisaheb Saifuddin has ascended as the new spiritual leader of the Dawoodi Bohra community. He is the second son of Muhammed Burhanuddin.

Burhanuddin’s death was followed by a series of condolences from various Pakistani political leaders as the local Bohra community grieved the death of their spiritual leader.

Prime Minister Nawaz Sharif and President Mamnoon Hussain also expressed their grief over Burhanuddin’s death and extended their condolences to his family.

Sindh Governor Dr Ishratul Ebad Khan said that Burhan always followed the religious teachings and his efforts of Burhan for Islam and Pakistan can never be forgotten. Dr Ebad said the whole nation is equally sad over his death. The Governor also prayed for eternal peace to the departed soul.

Sindh Chief Minister Qaim Ali Shah said the Sindh government was with Dawoodi Bohra Jamaat at time of this grief and announced that the national flag will remain at half mast on all government buildings on January 17 and 18 to express solidarity with the bereaved community who has been delivering marvelous services for the development of Pakistan.