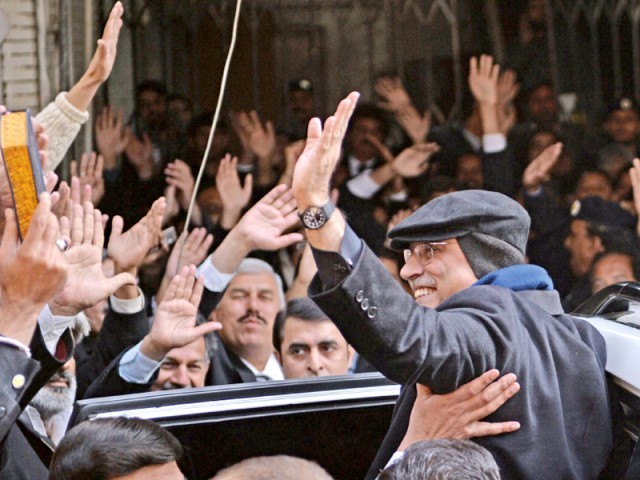 After months of defying summons on the pretext of security threats, Zardari made a brief appearance before the court to face corruption charges in two multi-billion dollar graft cases – including Cotecna and Polo Ground.

His counsel Farooq H Naek told Accountability Judge Muhammad Bashir that there was no evidence to frame charges against the former president. Naek also sought time to prepare his arguments for the next hearing and appealed for an adjournment of the case.

Following the brief session, the case was adjourned till January 18.

The former president arrived for the hearing amid heavy security around the court premises. His supporters broke into applause at his sight. In doing so, Zardari temporarily stole a march on his predecessor General (retd) Pervez Musharraf, who has so far skipped the indictment hearings against him.

Zardari is facing a number of cases relating to kickbacks, money-laundering and the illegal construction of a polo ground at the prime minister’s official residence, during his wife’s term in office.

Meanwhile outside the court, the defence lawyers and defiant party leaders chanted slogans praising the former president, comparing him with Musharraf, who has been accused of delaying his appearance before a special court in the ongoing treason trial.

Quick to contrast Zardari’s willingness to appear before the court with his predecessor, a key aide to the former president, Senator Farhatullah Babar said, “The civilian former president is appearing in court respecting its orders, while the military dictator is running away from the court.”

“As the main accused in the cases are either dead or acquitted, an application for acquittal of the former president will soon be filed in the court,” he added.

Another defence lawyer, Amjad Iqbal Qureshi, said the evidence against the former president was unconvincing and charges could not be framed on the basis of the testimonies by witnesses.

“He [Zardari] could not be indicted in the Polo ground case because we argued that charges cannot be framed against him as there are no witnesses against him,” Qureshi said.

Commenting on the hearing set for Jan 18, Naek said, “I cannot say whether or not he [Zardari] will appear before the court at the next hearing.” However, the prosecution demanded that the former president must appear at the next hearing as well.