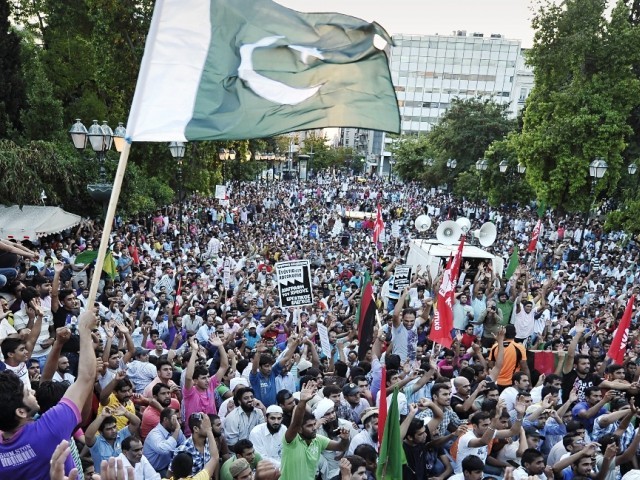 Thousands of immigrants to Greece, mainly from Pakistan gather at Athens central Syntagma square on August 24, 2012, during their protest rally against the recent violent attacks on immigrants by ultra nationalist groups and the police operations in order to arrest undocumented immigrants. PHOTO: AFP

Labourer Ghulam Farid’s dreams of greener pastures seemed to momentarily come true when he landed in the United Arab Emirates to earn a better living. But the rude awakening came when he was expelled from the country for illegal entry.

“I did not have a single penny to feed my four kids after being deported from the UAE,” the 34-year-old told The Express Tribune. “My agent cheated me and now I have nowhere to go.”

Farid is just one of over 380,000 Pakistanis who have been deported from 54 countries since 2009. According to the official figures obtained by The Express Tribune, the average deportation of Pakistanis during the five-year period amounts to 208 per day.

“No one helped us. We packed up and were sent home in a special plane arranged by the UAE government, which dropped us at Karachi’s Jinnah International Airport,” Farid said, recalling the days when the Gulf states started a crackdown against illegal immigrants last year.

“Before leaving Pakistan, I had handed over all my savings to an agent, Farid of Ward Sheikha Wala, Layyah, for documentation. But it was all a fraud — we were ultimately sent back to Pakistan as our documents were found to be forged,” he said.

While these figures are startling, Pakistan itself has handed over an estimated 25,712 illegal immigrants to some two dozen countries during the last five years.

The Iranian immigration staff has sent back around 43,000 Pakistanis in the last five years. Tehran handed over some 9,000 illegal immigrants to Pakistan’s border authorities at the Taftan border in Balochistan in 2013.

Similarly, the United States sent some 600 Pakistanis home in the last five years, with 90 deported in 2013. The United Kingdom has deported some 9,000 Pakistanis since 2008 on the grounds that they were living there without proper documentation. Around 2,100 Pakistanis were expelled in 2013.

A senior official associated with an Anti-Human Trafficking Circle under the Federal Investigation Agency told The Express Tribune that there are two reasons behind this mass deportation. In the first instance, deportees deliberately misplaced their documents to prolong their illegal stay. Some migrants managed to gain entry of other countries on the basis of forged documents usually prepared by their agents or human traffickers, he added.