Baloch musici­ans feel Coke Studio has made a mocker­y of their music by slashi­ng their part in Laila O Laila.
By Rafay Mahmood
Published: January 6, 2014
Tweet Email 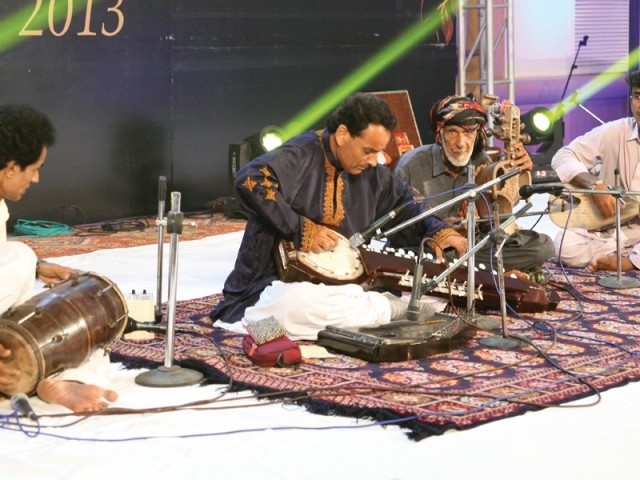 Ustad Mumtaz Sabzal, a globally known Banjo player with a reputed musical lineage, was disappointed at how he was cut out of Rostam Mirlashari’s Laila O Laila

KARACHI: Eight episodes released on a weekly basis — a promise that Coke Studio made to its loyal fans before airing. And yet, unfortunately, this isn’t what happened in reality. The schedules kept changing; going from a weekly release to a release on every alternate weekend.

The varying schedules are now the least of its concerns. In fact, what has taken everyone by surprise is the announcement that Coke Studio’s fifth episode, which aired last Sunday, was its last and final for this season.

“The final episode of Coke Studio’s sixth chapter in its journey was aired on all major television channels and radio stations and is available online across Pakistan,” said an official press release issued by the Coke Studio’s PR team, on Monday.

This rather sudden end to season six of South Asia’s most popular music show has not only disappointed its fans, but also some of the musicians who were a part of it, at least during the making if not on-screen. The Baloch musicians, who kept waiting to see their melodies and instruments featured on the show, were disgruntled and saddened at being sidelined and ignored.

Ustad Mumtaz Sabzal, a globally known Banjo player with a reputed musical lineage, was disappointed at how he was cut out of Rostam Mirlashari’s Laila O Laila (from episode 4) and how another song that he was featured in wasn’t even released.

“What happened with Laila O Laila ridicules Baloch music, and is a mockery of all the seasoned musicians who were featured in it but were left out of the final product,” Sabzal says to The Express Tribune. “I spent so much time with Rohail on this and played so many variations of the folk tune that he was dancing to them and kissed the musicians’ hands out of respect. However, sadly, there wasn’t even a single shot of those musicians.”

Earlier, while he was on a flight to Lahore with the rest of the musicians for the filming of the show, Sabzal had shared his excitement regarding his participation in Coke Studio with The Express Tribune. “It is high time that the sounds and rhythms of Balochistan, a province that is bleeding, are heard on a global platform,” he had said. “Through my Banjo and the sounds of other instruments from Gwadar and Naal, we have tried our best to bring the sweetness and humbleness of Baloch culture across in our music.”

Their excitement turned into sheer discontentment, and Sabzal shares that it was only on Rohail’s request that he invited musicians all the way from Surbandar, a fishermen’s village near Gwadar, to participate in this season. Amongst those musicians was Muhammad Umar Saurozi, a seasoned Suroz player who only performs at international shows in Sweden, Norway and South Africa and had simply agreed to be part of Coke Studio because he was a student of Sabzal’s grandfather.

“He spent quite a lot of time in the studio but all that was released was a small part that featured his son Fidaa Hussain playing the Balochi Dumboora. These are the people who made Laila O Laila what it is today and sidelining them was simply in bad taste,” asserts Sabzal.

While Saurozi wasn’t available for a comment, The Express Tribune contacted Abdul Kareem ‘Dholak Nawaz’, a dholak player who now resides in Mauripur, Karachi, but has had the privilege of playing Laila O Laila live with Faiz Mohammad Baloch — the legendary folk musician who first brought this celebrated tune to the forefront back in the ’60s.

“I was almost in tears when I saw Laila O Laila,” says Kareem. “The whole of Lyari, especially the upcoming Balochi musicians, were so excited to see one of their own teachers become a part of Coke Studio. When I saw the final product, I felt ashamed; it was as if I had been making false claims.”

Apart from Mohammad Baloch, Kareem is one of the most sought after dholak players in Sindh and Balochistan, and has toured and played with popular singers like Humaira Channa and Shazia khushk to name a few.

“I know we were paid, and that was what we were hired for, but at this point in life all one wants is recognition on a bigger platform, not money,” emphasises Kareem. “I have grown up with Laila O Laila, and not being a part of its modern rendition after putting so much effort into it, really hurts. But more than myself I feel sorry for Ustad Sabzal and Ustad Umar, because they are our legends and two of the few people who have been pillars of Balochi folk music in Pakistan.”

What needs to be noted is that this is not the first time such an incident has happened on Coke Studio. Random rejection of songs has made other artists unhappy as well, during earlier seasons. Sajjad Ali’s third song in season four, which he perceived to be “the most exciting number ever” when he shared it with the writer, was also never released.

The Express Tribune contacted Lotus PR, the company that handles the public relations for Coke Studio, for a comment from Rohail Hyatt. However, there was no response till the filing of the story.