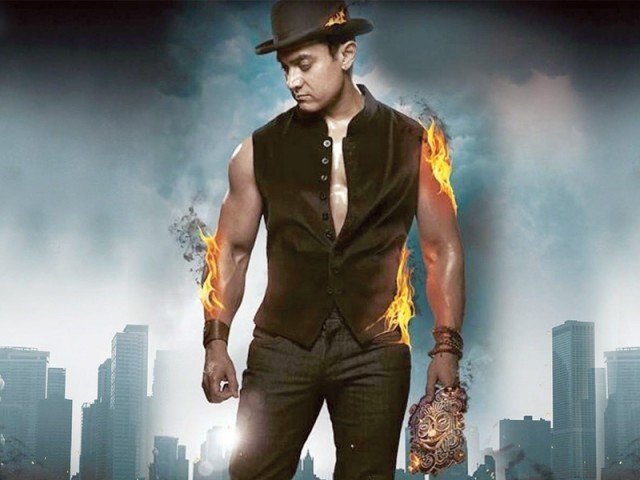 Aamir asserts that it is very important for him to emotionally connect with a project. PHOTO:FILE

MUMBAI: Bollywood’s Mr Perfectionist Aamir Khan is currently on cloud nine, thanks to the overwhelming success of his latest release Dhoom 3, which seems to be breaking all box office records. However, Aamir asserts that money has never been a concern for him. “Till today, I have not worked for money and that is one of my biggest strengths,” he said.

Aamir is known to have experimented with films, roles and genres galore in his over 25-year movie career. From playing a lover boy, teacher, villager and now a villain — he has done it all, but it’s vital for Aamir to connect emotionally with a project before he gives it a thumbs-up.

“I am very happy because I do what my heart says. I never work for money,” said the 48-year-old star. “Give me a billion rupees for a film and if I don’t like it, I will not do it. I cannot compromise on my emotions, and money cannot buy me.”

He cemented his spot in the movie business with projects like Dil Hai Ke Manta Nahin, Jo Jeeta Wohi Sikandar, Hum Hain Rahi Pyar Ke, Raja Hindustani and Sarfarosh. The year 2001 turned out to be a turning point for Aamir, as he featured in notable films like Lagaan and Dil Chahta Hai.

Thereafter, he featured in films like Rang De Basanti, Fanaa, Ghajini, 3 Idiots and the critically acclaimed Dhobi Ghat. He even acted in and directed the commercially and critically lauded 2007 film Taare Zameen Par, which raised awarness about dyslexia. He reasons his choice of films on the basis of his own mental sensibility.

“It is difficult for me to go out of my sensibilities and work. I can do different kinds of genres, but if my sensibility doesn’t match, I will not do it. If it disturbs my values, I can’t do that film,” he said. IANS

Paul Walker’s organs too charred to be donated