Hundreds mourn as Leghari is laid to rest

Hundreds mourn as Leghari is laid to rest 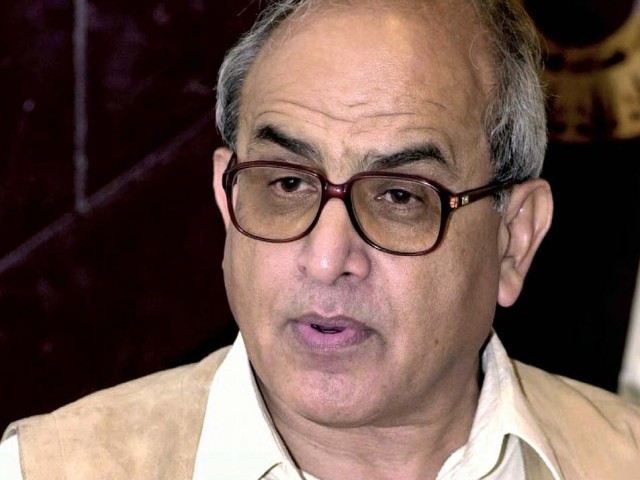 Locals from all over Dera Ghazi Khan came to pay their respects to the political leader on Wednesday and over 700 people attended Leghari’s funeral. “We cannot believe he is gone. He served this country with every fibre of his being and we are grateful to have been his children,” said Leghari’s son Awais Ahmed Leghari.

Leghari’s father, Nawabzada Sardar Mohammad Khan Leghari, was chief of the Baloch Leghari tribe. Farooq Leghari attended Aitchison College in Lahore in 1958 and went on to the Punjab University, from which he graduated in 1960. Following this he attended Oxford University in the UK where he obtained a BA (Honors) in economics and an MA in 1963.

Upon his return to Pakistan, Farooq Ahmed Leghari joined the civil service of Pakistan in 1964 and served in various capacities until 1973 when, on the death of his father, he succeeded him as chief of the Leghari tribe. Leghari then resigned from the civil service to take up a political career as a member of the Pakistan People’s Party (PPP).

Starting out in June 1973 as a joint secretary of the PPP in Dera Ghazi Khan, he moved on to become finance secretary of the provincial branch and eventually the party’s secretary general. Elected to the Senate in August 1975, he joined the cabinet of Prime Minister Zulfikar Ali Bhutto as minister of production in 1977.

Farooq Leghari’s next big win was a National Assembly seat in the March 1977 elections. At the time, there were violent countrywide protests charging that the PPP had rigged the polls and this culminated in the imposition of martial law, which led to a coup headed by the chief of the army staff, General Ziaul Haq, on the night of July 4-5, 1977. Farooq Leghari remained staunchly loyal to the PPP throughout Zia’s reign despite being imprisoned for over four years.

He took part in the 1988 elections and won his seat in the National Assembly and served as minister of water and power in Benazir Bhutto’s cabinet. On August 6, 1990, President Ghulam Ishaq Khan deposed Benazir Bhutto, citing her government for corruption. Following new elections held on October 24, 1990, in which the PPP won only 45 out of 217 seats, Nawaz Sharif became prime minister. Farooq Leghari retained his seat in the National Assembly as the only PPP member from Dera Ghazi Khan. “He always had tremendous support at home in Dera Ghazi Khan,” said his friend Daniyal Safdar, while attending his funeral.

Farooq Leghari was appointed foreign minister in Prime Minister Bhutto’s new government and on November 13, 1993, Leghari won by a margin of 106 votes in an electoral college of 462.

He was sworn in as Pakistan’s eighth president.

In November 1996, Leghari made an unprecedented bold move of accusing the prime minister of corruption and dismissed Bhutto from office. He dissolved the assembly, ordered a new general election for February 1997 and set up an interim government. In April 1997, he resigned from the PPP.

Later, he went on to create his own political party, the Millat Party to participate in the general elections of 2002. Farooq Leghari also formed an alliance with the Pakistan Muslim League- Q (PMLQ).

Locals expressed great sorrow at the loss of the veteran politician and expressed their sympathies with his mother and children.

At 6:30 pm on Wednesday, Farooq Ahmed Leghari was laid to rest alongside the graves of his father and grandfather in the ancestral family grave yard at Choti Zareen.