Arvind Kejriw­al, the CM of Delhi, could not attend his first day of office as he was suffer­ing from diarrh­ea.
By AFP
Published: December 30, 2013
Tweet Email 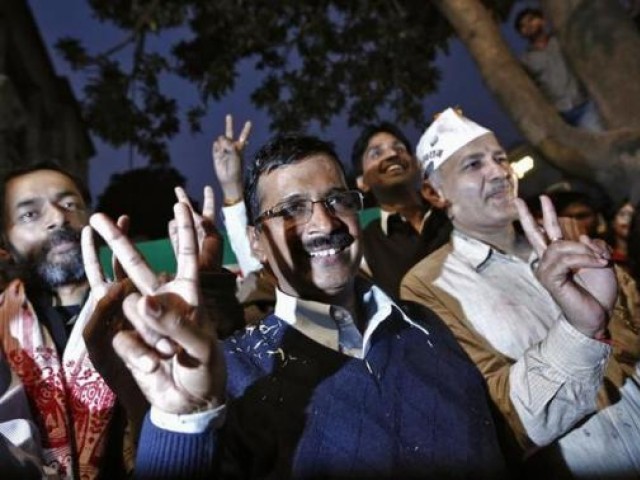 NEW DELHI: India’s anti-corruption activist Arvind Kejriwal swept to power last month on a promise of greater transparency and he began office Monday true to his word – admitting that a local restaurant had spoiled his first day.

Kejriwal, whose pledge to fight for India’s common man won over voters in New Delhi state polls, had been set to start governing the capital on Monday after being sworn in as chief minister over the weekend.

But after weeks of rallies in a gruelling election campaign that pitted him against the two main political parties, Kejriwal said he had fallen ill with diarrhea and a severe fever and could not come into the office.

“It was so important to attend office today. We had planned the water announcement. God, bahut galat time par bimaar kiya (you’ve had me sick at a very wrong time.)”

It was so imp to attend office today. We had planned the water announcement. God, bahut galat time par bimaar kiya.

Kejriwal, whose Aam Aadmi party was born out of an anti-corruption mass movement two years ago, has pledged to give free water to households in Delhi and slash their electricity bills.

His latest comments were an instant hit on Twitter, with plenty of offers of sympathy – but also some suggestions for a little privacy.

“When the Chief Minister gives you minute by minute update on his bowel movements…Hail democracy,” said a Congress party spokesperson Priyanka Chaturvedi.

“Will Arvind Kejriwal pass the motion? That is the question we are asking tonight,” said television editor Ritupana Chatterjee.

Kejriwal’s party also asked wellwishers and supporters in a tweet to stop flocking to his home, saying he needed to rest.

Kejriwal’s party agreed to lead the Delhi government with outside support from the Congress party which rules nationally but was pushed to a distant third place at the Delhi elections.

Kejriwal’s stunning electoral debut at the December 4 polls jolted Congress and the main opposition party Bharatiya Janata Party just months before the general election due by May.