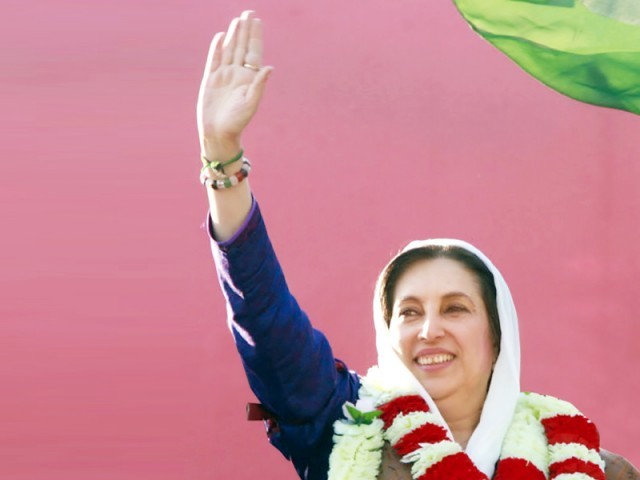 I was in Badin at a PPP election camp during the campaign. My cousin received a phone call and I saw him placing his head in his hands. “I think something very bad has happened,” he said to me. I called a friend in Dawn News and he told me BB had been shot and there was a chance she wouldn’t make it. We didn’t know what to do – people were putting up flags, dancing, singing Dila Teer Bija and chanting PPP slogans. Only my cousin and I knew what had happened in this crowd of thousands. Thirty minutes later, we were sitting in the camp office when we heard screaming. The news was out. We closed the camp and told people to go home. In 45 minutes, the firing started. Our office was in walking distance of Zulfiqar Mirza’s office and cars full of men arrived there and started firing. Things went out of control within minutes – people were looting banks and shops. Some people went to a thana near my house and attacked it. I was handed a pistol and told to stand outside the house of a family, because we were scared the women and children would be targeted.

I was reading a book in Quaid-i-Azam Library when an employee of the library informed all of us that BB was attacked in Pindi. We all rushed towards the TV. The news was shocking for me but I thought she couldn’t die due to her security. I can’t forget when the news anchors announced that she was no more. I stayed before the TV for 15 minutes, waiting for them to announce that she is alive and out of danger but they didn’t.

My daughter is a naat khwaan and we were on our way to a milaad in Jaamgoth for a family’s wedding. We heard the news on the radio. When we got to Jaamgoth, we were unable to leave for three days. The family went ahead with the wedding the next day and it was done very simply. Everyone wore casual clothes. There was also a wedding in our building in Azizabad and all the food from the reception was sent back to the family’s house. At 3 in the morning, they were able to do the rukhsati and the girl left her home on a bike.
Sobia, Karachi

I was at my friend’s house. My father told me it wasn’t safe to head home. So it was the first time I was able to stay the night at her house.
Sagheer, Karachi.

I was in the newsroom and a ticker ran on TV saying she was injured. We thought it was like the October incident, which is why we assumed it was just a cracker or a false alarm. Then someone said, ‘She’s died!’ We were shocked, we didn’t believe him. Our first fear was how to get home. Our TV reporters then called me and because I’m a sports reporter, they explained to me in terms I would understand: “It’s like lunchtime at the cricket match, the rioters are tired and have headed home, they’ll come back out at Fajr.
Saleem, Karachi.

I was with my sister at Boat Baisin and my baby, who was 4 months old at the time. I received a text message from my father saying ‘Benazir injured.’ We didn’t pay much attention to it, finished our shopping and returned to my mother’s home. Our chowkidar, who is from Larkana, opened the gate. His eyes were wet and he said, ‘Benazir ko maar diya.’ I wasn’t able to leave home for 3 days. We didn’t have enough diapers for the baby and the only shop that was open was selling diapers for newborn babies. We had to make do with those.

I was stuck in a traffic jam on Korangi Road when my mother called to tell me that Benazir Bhutto had been killed. Just then, a man knocked on my window and said, “Benazir mar gayi! Gaari choro aur bhago (Benazir is dead! Leave your car and run).” I saw men with sticks approaching, some things burning further away. I parked my car and started walking. Seconds later, I heard a lot of shouting and I lost my vision for a few seconds. The Rangers had used tear gas as the men had attacked a bus full of people. Still struggling to see, I was escorted by Rangers personnel to National Medical Centre Hospital where many were seeking refuge. My family came to pick me up a couple of hours later. I was okay but my eyes weren’t – they were burning and watery. So you could say I was tearing up when BB died.
Fawad, Karachi

I had taken a day off from work to grudgingly take a friend from Seattle around Karachi. We were at Park Towers, when we learned Benazir had been shot. I dismissed the news as yet another spark of violence. It’s Karachi, I thought. Who stops here? By the time we stepped out of the mall, Benazir was already at the hospital. It took fifteen minutes for the city to crash. She had died. The idea of her death was vague, eclipsed by the urgency of getting home, cutting through the panic that was catching on. Traffic jams in the city are a cacophony of people cursing, cars honking and restlessness. That day, it was still and silent. BB stopped Karachi.

Troubleshooting for good: PML-N forms unit to facilitate its MPs