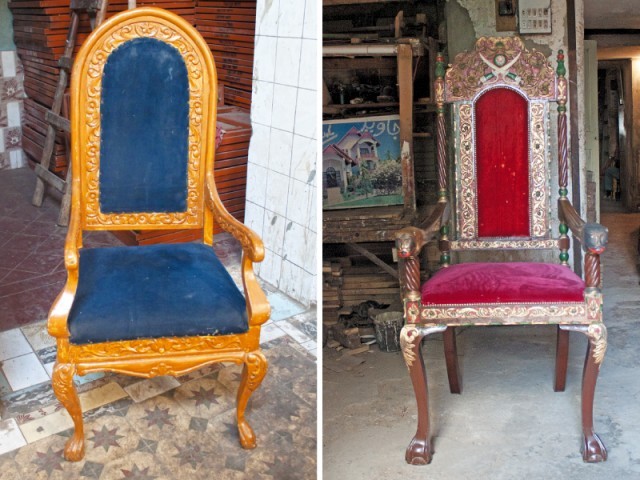 Benazir Bhutto sat on the chair (left) when she visited the National Refinery in 1995. The cranberry red chair was used by Queen Elizabeth II. PHOTO: TOOBA MASOOD/EXPRESS

On December 27, 2007, Riaz Ahmed was at his workplace, Manzoor Sons, a catering, decoration and tent-manufacturing business, when he received a call from his wife. “I was very busy as we were juggling seven or eight functions that day,” he says. “When I answered the call, my mind was preoccupied and all I heard my wife say was “Zaalimon ne BB ko maar diya (those cruel people killed BB)”.

As his workers scrambled for updates on the functions, Ahmed thought of a room, one floor above his office, where a caramel coloured wooden chair was placed in a dark corner, the curved ‘S’ shape of its legs peeking from under an olive green tarpaulin.

This is the chair Benazir Bhutto sat on when she visited the National Refinery in 1995, during her second stint as prime minister. “It had rained the night before,” recalls Ahmed, “and it was still damp when Benazir arrived at the refinery in her helicopter.”

Not wishing for the prime minister to tread on the muddy ground, Ahmed and two of his employees stood by the helicopter with a tightly rolled red carpet, unfurling it before Benazir as she walked from the helipad to the building.

A photograph of the day sits under the glass surface of Ahmed’s desk at his office on Burns Road.

“She came back to do something for Pakistan this time,” he says, looking at the image.

“She didn’t realise how much love we would give her.” Ahmed says he was unable to accept the news of Bhutto’s assassination until he reached home at 4 am on the night of the 27th.

The weighty sheesham (rosewood) chair with a cranberry red velvet seat is now upholstered in a royal blue fabric and it was last used at a function for the former chief minister’s nephew three years ago.

“He told me he had seen a blue fabric he liked at the PM house in Islamabad and so we had to change the fabric,” Ahmed says grudgingly.

This sadarti kursi (presidential chair) was made in Chiniot and has been used at a few weddings and some government functions. But, Ahmed says, those who request it don’t know who sat on this chair nor do they care.

“That time is long gone.” Ahmed, who refers to Benazir as ‘Bibi,’ feels a connection with the Bhutto family. “I’ll show you a chair that Zulfikar Ali Bhutto used,” he says. Describing the lions’ faces carved into the chairs arms. “You’ll feel like the sher (lion) will jump out at you,” he promises, uncovering a sheesham high-backed chair with a red velvet seat, gulkari work or carvings of gold flowers curled around a crest of two swords and the crescent and star – their brilliance faded over the years.

The chair was first used by Queen Elizabeth in 1961 during a visit to Pakistan. “We also provided this chair for a function for Ziaul Haq but we needed to create a special footstool as…” Ahmed breaks off, lowering his tone, “woh kadd mein chotay thay (he was short in height).” Crafted in Multan, the chair cost roughly Rs3,000 to produce during the 1940s.