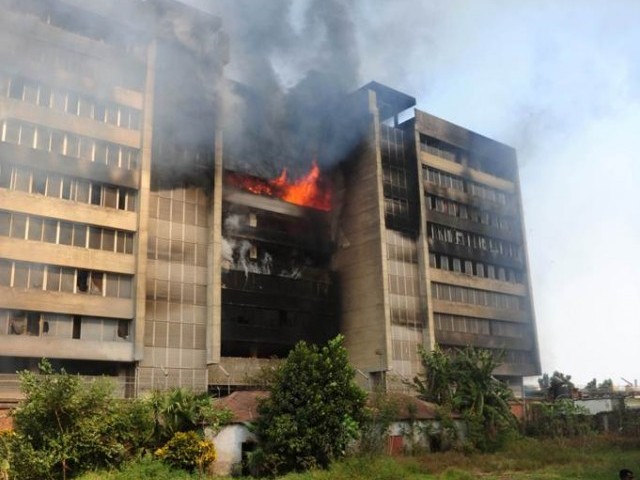 File photo of a fire in a garment factory in Bangladesh. PHOTO: AFP

DHAKA: Four global retailers, along with manufacturers and labour groups, have agreed to set up a $40 million compensation fund for victims of Bangladesh’s Rana Plaza disaster that killed 1,135 people, officials said Tuesday.

They said retailers Primark, El Corte Ingles, Loblaw and Bon Marche have pledged to contribute to the fund following the collapse of the garment factory complex in April, the world’s worst industrial tragedy.

“A fund has been established to compensate the victims, injured workers and dependants of the deceased, of the Rana Plaza collapse,” said Lejo Sibbel from the International Labour Organisation which helped broker the agreement reached last month.

“An estimated $40 million will be required to compensate the victims and their beneficiaries,” said Sibbel, who is based in Dhaka.

The agreement comes after talks between owners of clothing brands and pressure groups on a compensation deal ended in failure in Geneva in September.

The collapse of the nine-storey complex on the outskirts of Dhaka,where workers stitched clothes for top Western retailers, highlighted the often appalling conditions and lack of rights for workers at Bangladesh’s 4,500 garment factories.

The country is the world’s second largest garment exporter and the industry is a mainstay of its economy.

More than 100 European and US retailers pledged to improve safety in the wake of the tragedy, but a deal on compensation for families of workers and those injured has remained elusive.

Families have received some short-term compensation from Anglo-Irish retailer Primark as well as the Bangladesh government.

Primark has also started making contributions to the new fund, according to Roy Ramesh, general secretary of the Bangladesh chapter of international labour group IndustriALL.

Spain’s El Corte Ingles, Canadian chain Loblaw and British retailer Bon Marche have also agreed to make contributions, Ramesh told AFP, although details of how much they will provide is unknown.

The four retailers themselves could not be contacted for comment.

“At least 29 brands have had their clothing made at the five factories at Rana Plaza. We hope all of them will contribute to the fund,” Ramesh said.

“It is the least they could do for the workers and their families who lost everything while making apparel for them,” he said.

IndustriALL is among labour groups which have joined the agreement on the fund, which will be chaired by the Geneva-based International Labour Organisation.

The Bangladesh Garment Manufacturers and Exporters Association, which represents the nation’s textile factories, and the Bangladesh Employers Federation have also signed up.

But the Bangladesh government said it would not contribute to the fund, having already paid 180 million taka ($2.25 million) in total to 777 victims of the disaster.